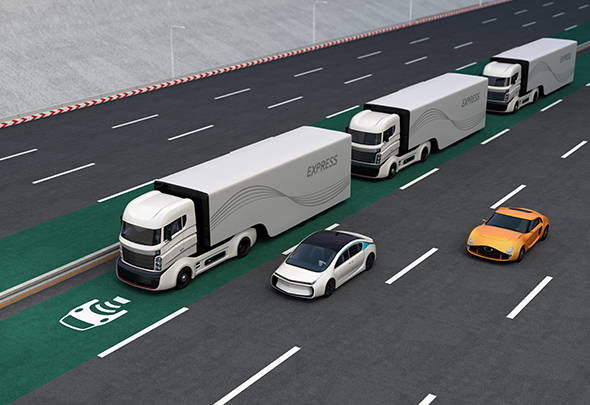 You’ve probably seen a number of articles and videos over the last year or so, proclaiming that autonomous vehicles—also known as “driverless” cars and trucks—will be commonplace on our highways within a few years.

That future is coming, and maybe sooner than a lot of folks thought. Last October, an autonomous truck created by Otto Trucking delivered a shipment of Budweiser 120 miles from Fort Collins to Colorado Springs, with no driver at the controls while the truck was on the highway.

But Budweiser is one thing. A tanker of liquid hydrogen is another. How will autonomous trucks be able to handle potentially dangerous hazmat shipments safely?

First of all, let’s correct the common misperception that “autonomous” means “driverless.”

Yes, Google has drawn millions of views to videos of their cars driving themselves through city streets. And Ford has promised to have fleets of driverless cars in service by 2021. But no one knows how soon vehicles like this will actually hit the road in real-life situations.

Autonomous trucks are not driverless. They still require a driver to navigate off-highway driving, docking and—most critically for hazmat situations—loading and offloading of cargo. The only place the trucks drive themselves is on the highway, and even then the driver has to be present in the cab.

Well, we’re hazmat pros. We get paid to worry. Let’s look at the potential concerns.

Currently, anyone driving a truck carrying hazardous materials must have a hazmat endorsement, and they must complete the Transportation Security Administration’s security threat assessment.

There is no reason these qualifications should change for drivers of autonomous trucks. However, we can foresee a scenario where lobbyists say, “Hey, these guys are just sitting there doing nothing most of the time. Why not relax those requirements to make more drivers available?”

Relaxing the requirements for hazmat drivers would be a grave error. Most hazmat accidents occur during loading and unloading. The best way to prevent these accidents (and minimize their effects if they do occur) is to have fully trained personnel on hand—and that training has nothing to do with whether a truck drives itself.

Commercial truck drivers must observe strict limits for driving and off-duty hours; currently, a driver must take 10 consecutive hours off after driving a total of 11 hours.

But again, we can foresee a scenario where lobbyists say, “Hey, these guys are just sitting there doing nothing most of the time. Why not relax those time limits to reduce shipping times?”

And again, we maintain that relaxing drivers’ time limits would be a serious error. We want drivers’ reflexes on full alert when they drive truckloads of Dangerous Goods through our city streets, and keeping them on the road for longer hours with less rest—even if they’re not actively driving—would reduce their alertness.

In theory, autonomous vehicles can drive better than human drivers, since they’re unaffected by fatigue, distraction or that missed free throw in last night’s game. They can also, in theory, react more quickly and accurately to unexpected conditions.

Someday soon, those theories will be put to the test with real-life cars, trucks, passengers, ice storms and white-tailed deer.

We’d prefer they be put to the test in vehicles that do not carry the potential to kill dozens of people or cause millions of dollars in damage. Let’s be as prudent as we can possibly be. Let’s allow autonomous trucks to prove themselves for a few years before we start loading them with Dangerous Goods.