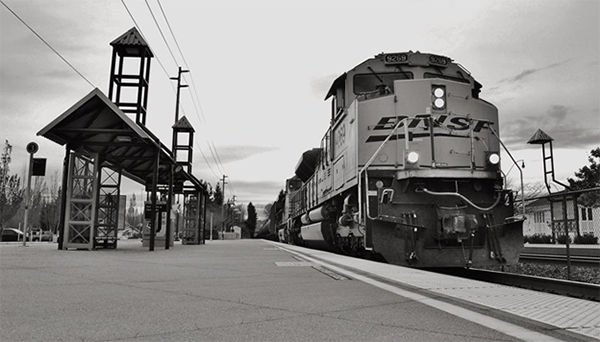 Amidst a busy two weeks of regulatory activity across the federal government, the FRA issued a revision to civil penalties as well as an important ICR dealing with the transport of flammable liquids by rail. A BNSF oil train roars past the commuter station passenger platform in Sumner, Washington south of Seattle on Sunday, November 25th, 2018. Photo © 11/2108 by Nikki Burgess; all rights reserved.

Hopefully everyone has had a safe and enjoyable Thanksgiving holiday period—welcome back!  The last two busy weeks of regulatory activity are below, with the elephant in the room being the release this morning of PHMSA’s HM-215O International Harmonization NPRM, or proposed rule.  This rule, once implemented, would align US regulations with those found in the 20th Edition of the UN Model Regulations, the ICAO Technical Instructions, and IMDG Code as updated for 2019.  The NPRM’s comment period will close on January 28th, 2019.

As noted above, the agency released the HM-215O Harmonization Rule as an NPRM, or proposed rule.  The rule will now be open for comments, followed by a period of necessary consideration of those comments and potentially, a revision based on them to the final rule.  When will the final rule publish?  PHMSA is aware of the urgency in the DG community over harmonization, so one can guess that the agency will expedite finalization after the close of comments, but even so it is to be expected that there will some further delay in publication, especially if comments are extensive.  Two areas of the NPRM that in my opinion may draw comments are the change to classification standards for Class 8 corrosives, and new guidance regarding classification of articles bearing dangerous goods.  Both issues introduce new concepts to the HMR which, one can posit, some stakeholders may wish to have addressed and revised in some way.   The regulated community will just have to wait and see what happens.  Some of the major points the rule addresses:

Detailed treatment of the above issues can be found in the NPRM itself, linked to here

Homeland Security has also published its semi-annual regulatory agenda, which includes activity surrounding the US Coast Guard and the TSA