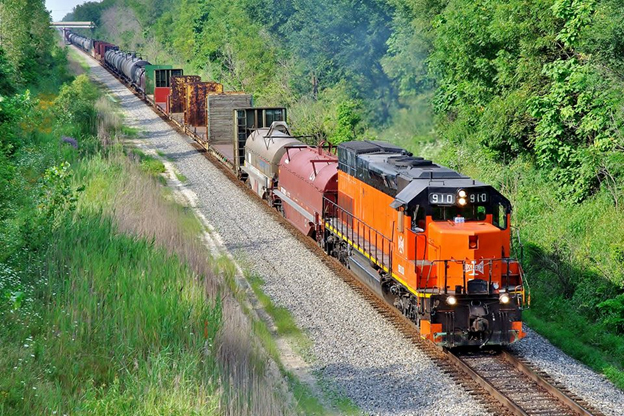 Under a new federal grant program, communities can receive funds to help increase safety for flammable liquid carrying trains operating in their communities, like this Canadian National train in Monee, Illinois. Image © 8/2015 by Nikki Burgess; used with permission.

In the Friday, September 04, 2015 edition of the Federal Register, the US Department of Transportation’s (USDOT) Federal Railroad Administration (FRA) announced a new grant program.  Under the Railroad Safety Grants for the Safe Transportation of Energy Products by Rail Program (Step Rail), ten million dollars is being made available to local and state governments to address safety issues in their communities that have arisen on account of increased traffic of crude oil or other flammable liquid cargo hauling trains on local rail lines.

The grants are the usual “80/20” match requirement; a federal share of 80%, with the remaining 20% of the needed funds to be found at the state and local levels.  The Register notice suggests (but does not mandate) several uses for the grant money, among which are:

The FRA must receive proposals under the program no later than November 4th, 2015.  The grant program is part of the federal government’s continuing response to the safety issues raised by recent incidents of derailments and subsequent fires and spills involving flammable liquids transported by rail.  Many communities along heavily traveled rail lines have few resources with which to address such concerns and the program is intended to help alleviate such a paucity of resources.

Details on the Program from the FRA can be found at: https://www.fra.dot.gov/Page/P0829