Since 2016, when the International Civil Aviation Organization (ICAO) implemented drastically more restrictive global regulations on shipping lithium batteries by air, shippers have adapted and done their best to comply. Yet many still find the regulations confusing and have questions about what they can and cannot do.

In March 2019, the Pipeline and Hazardous Materials Safety Administration (PHMSA) adopted an Interim Final Rule (IFR) generally harmonizing the 49 CFR with the ICAO Technical Instructions, so the 2016 restrictions now apply to all air transport within the United States, as well.

Here’s everything you need to know about the current air transport regulations for all types of lithium batteries and devices.

All standalone lithium batteries are prohibited as cargo on passenger aircraft.

In February 2016, the ICAO—the United Nations agency that regulates the transport of Dangerous Goods aboard international aircraft—enacted a ban on transporting standalone lithium-ion batteries (UN3480) as cargo on passenger aircraft. The ban went into effect April 1, 2016, and remains in force.

Since lithium metal batteries (UN3090) were already prohibited, the new regulation meant no standalone lithium batteries, in any quantity or packaging, could be shipped as cargo on passenger aircraft. There is still no compliant way to do so without a special permit or other approval from a competent authority.

The March 2019 PHMSA IFR harmonized United States lithium-ion battery transport regulations with those of the ICAO, along with extra requirements for ground shipments to ensure no lithium-ion batteries were loaded on aircraft contrary to the regulations. For more detail and current updates on these and other regulations, you can bookmark our Lithium Battery Resources page.

Additional restrictions on transporting lithium-ion batteries via air were implemented effective April 1, 2016, and are still in force today. These were also adopted generally “as is” by PHMSA in March 2019:

While these restrictions may feel complex and burdensome, you can find quick guidelines for compliantly shipping any type of lithium batteries (by any mode) using our Lithium Battery Advisor software.

Yes, you can still ship lithium batteries by air.

In addition, passengers may still transport their battery-powered devices and spare batteries in their carry-on bags.

Plus, all lithium batteries may still be compliantly transported on cargo-only aircraft, subject to regulations. However, you should be aware that airlines may have variations in place that restrict lithium battery transport, even on cargo aircraft.

You can stay current on the latest regulations and variations for lithium battery transport on our Lithium Battery Shipping News page.

If you’re shipping lithium-ion batteries by air that are not contained or packed with equipment (UN3480), you must: 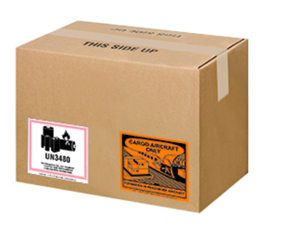 Finally … it’s forbidden to transport damaged, defective or recalled lithium batteries by air, but they can be shipped safely and compliantly via ground in advanced Obexion battery packaging—a complete line of protective packaging for shipping lithium batteries.

Will there be new lithium battery transport restrictions?

Thankfully, there have been no catastrophic air transport incidents relating to lithium battery issues in recent years, so there’s no impetus for major new restrictions. Airlines may continue to change variations, however, and certainly they may be selective with respect to which shippers they will accept lithium battery shipments from.

Meanwhile, at the direction of the ICAO, the SAE International G-27 Lithium Battery Packaging Performance Committee continues its efforts to define a standard that may allow shippers to once again transport standalone lithium batteries as cargo on passenger aircraft in the future. That standard, however, is still likely at least a year away.

For help with lithium battery questions now and in the future, call Labelmaster TOLL-FREE at 800.621.5808 or send us an email. We’re here to help make sure you can ship your lithium batteries safely throughout 2020 and beyond.

Make sure your Dangerous Goods shipments are safe and in complete compliance with a full line of solutions from Labelmaster—a full-service provider of goods and services for hazardous materials and Dangerous Goods professionals, shippers, transport operators and EH&S providers.