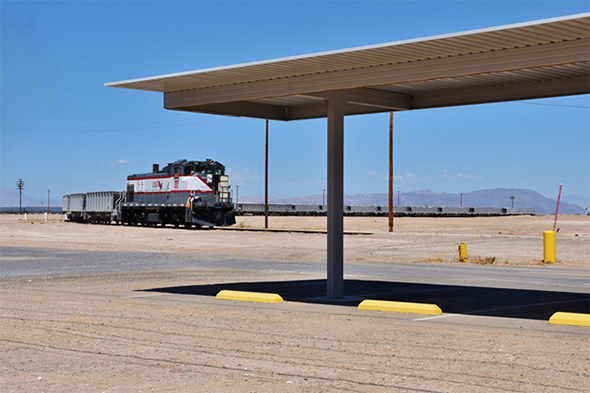 Federal agencies including the USDOT are publishing their semi-annual regulatory agendas; these lay out the intended course of that agency in the coming six months. They serve as useful information for stakeholders, including railroads like the US Gypsum narrow gauge railroad—last of its kind in the nation—in Plaster City, California. The railroad is seen here unloading ore on Saturday August 26th, 2017. Image © 8/2017 by Nikki Burgess, all rights reserved.

It’s the week prior to the Labor Day holiday in the United States; regulatory activity is slow as most of official Washington lingers in the August recess and vacation period soon to close out.  Meanwhile our thoughts are with those affected by Hurricane Harvey, and the emergency responders who are assisting them.  Here’s the latest news in the regulatory world:

Several relevant federal agencies released their semi-annual regulatory agendas.  These agendas, as the title implies, issue twice a year and set forth that agency’s estimated priorities and schedules for the upcoming period.  Although things often change from the agenda, they can still be a useful preparatory guide to what may be coming up in the near term.  Not all agencies are represented here; it’s likely the publication of the agendas may stretch over a couple of weeks, so look for further news on this front in upcoming blog posts.  Meanwhile, see the various agendas that have been published at this point, listed by agency, right here: