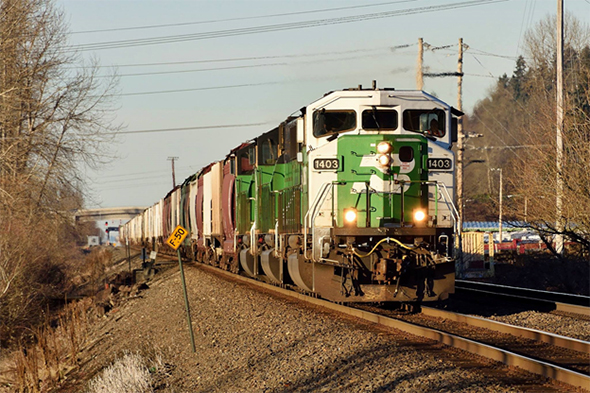 The Surface Transportation Board (STB) delayed the effective date of a new service reporting metric for Class 1 railroads intended to help speed the nation’s goods. This part of the “freeze” on regulatory activity ordered by the Trump Administration. A BNSF manifest train speeds though Sumner, Washington on February 12th, 2017. Image © 2/2017 by Nikki Burgess; all rights reserved.

And the freeze goes on.  The United States continues to labor under the regulatory freeze imposed by the new administration.  No specific end dates have yet been set for the action.  One hopeful rumor (and it is at this point only rumor) is that the new Transportation Secretary, the Honorable Ms. Elaine Chao, may soon authorize release of the HM-215N PHMSA UN Harmonization rule, which presently languishes.  Some talk in the industry has mentioned the potential of action in the next two weeks, but it must be stressed that no official word has been promulgated—we’ll all just have to see what happens.  We’ll stay on top of it for you.  Meanwhile, there was some miscellaneous action of note:

The Department of Labor (DOL) is submitting the Occupational Safety and Health Administration (OSHA) sponsored information collection request (ICR) titled, ‘‘Construction Fall Protection Systems Criteria, Practices, and Training Requirements,’’ to the Office of Management and Budget (OMB) for review and approval for continued use, without change, in accordance with the Paperwork Reduction Act of 1995.  This is part of the safety agency’s effort to monitor this important area of employee protection in the industry.   The OMB will consider all written comments that agency receives on or before March 9, 2017. Here’s the link

On December 5, 2016, the Board published a final rule that established new regulations requiring all Class I railroads and the Chicago Transportation Coordination Office (CTCO) to report certain service performance metrics on a weekly, semiannual, and occasional basis. The Board is staying the effective date of the final rule. Effective February 7, 2017 and applicable on January 27, 2017, the final rule establishing 49 CFR part 1250 published at 81 FR 87472 on December 5, 2016, is stayed until March 21, 2017. The initial reporting date under the final rule will be March 29, 2017. More information right here

In international action, the nation of Brazil has updated its regulations governing the transport of Dangerous Goods by ground.  In essence the revision brings the Brazilian rules up to speed with the most current UN Model Regulations (i.e., the 19th Revision of the UNMR).  Here is a link to the revision in English translation