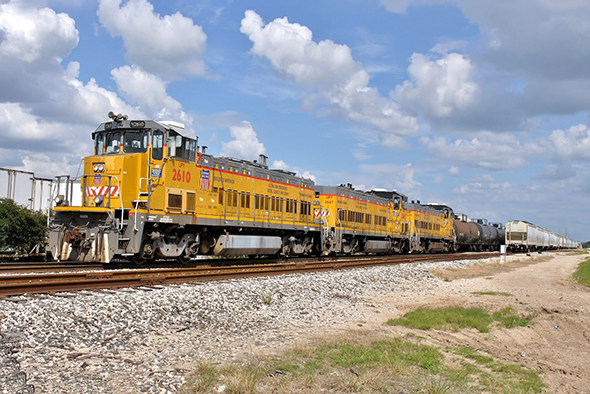 The nation’s leading rail carriers will spend a combined $2 billion+ USD on safety and operating infrastructure in 2017, the American Association of Railroads announced. A Union Pacific Railroad industry switcher works in Laporte, Texas along the “Chemical Coast” east of Houston. Image © 9/2014 by Nikki Burgess; all rights reserved.

The third week of the regulatory freeze finds the anticipated result impacting the current pace of activity—the last week saw action drop off to a minimal level.  At present, when and how the freeze will lift and exactly what final impact it may have on what was planned before its implementation remains unclear—we’ll be watching for you!  Even so, an item or two of interest is on today’s menu—including official delays to effective dates to rules that have already been published but had not yet become effective:

In accordance with the Presidential directive as expressed in the memorandum of January 20, 2017, from the Assistant to the President and Chief of Staff, entitled ‘‘Regulatory Freeze Pending Review,’’ this action temporarily delays until March 21, 2017, the effective date of the final rule titled ‘‘Minimum Training Requirements for Entry-Level Commercial Motor Vehicle Operators,’’ initially effective February 6, 2017, is delayed. The effective date of the final rule published on December 8, 2016 (81 FR 88732), is delayed until March 21, 2017. Here’s the full brief

The nation’s consumer product safety agency continues to advance its effort to regulate the emissions of portable generators—news that may be of interest to contractors and small businesses that maintain the devices for commercial use.  The CPSC announced that there will be an opportunity for interested persons to present oral comments on the notice of proposed rulemaking (NPR) the Commission issued proposing a standard that limits carbon monoxide (CO) emissions from operating portable generators. Any oral comments will be part of the rulemaking record.  The meeting will be on March 8, 2017, in the Hearing Room, 4th Floor of the Bethesda Towers Building, 4330 East-West Highway, Bethesda, MD 20814. Requests to make oral presentations and the written text of any oral presentations must be received by the Office of the Secretary not later than 5 p.m. Eastern Standard Time (EST) on March 1, 2017.   Here’s your way in

On February 1st the American Association of Railroads, the industry’s major advocacy organization, announced that the nation’s leading carriers would spend up to two billion additional dollars in 2017 to improve their safety and operating infrastructure, despite continued soft freight ladings compared to recent years.  Much of the spending will cover efforts that respond to various federal mandates, including Positive Train Control (PTC) and track safety standards.  See the story here