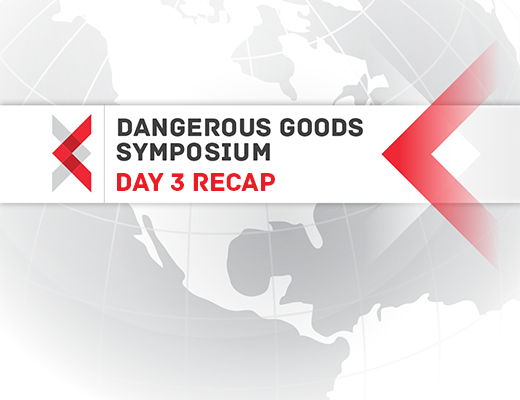 You know you’re in a conference full of Dangerous Goods pros when a panelist says, “Hey, how about that electric violin at Labelmaster Fest last night? What do you suppose the watt-hour rating on those rechargeable batteries is?”

Yes, it was Lithium Battery Friday at the Dangerous Goods Symposium—a annual tradition where a panel of experts share the latest developments in international lithium battery shipping trends and regulations. They also discuss their personal views and experiences and answer knowledgeable questions from the audience.

The subject of lithium batteries, of course, comes up frequently during Day 1 and Day 2 of the Symposium—it’s been the most controversial topic in the Dangerous Goods galaxy for years. But for pure lithium battery regulatory immersion, there’s nothing like DG Symposium Day 3.

Do you think today’s lithium battery regulations make transport safer, or just more complicated? Tell us what you think in the comments below!

Why lithium batteries are such a concern

Two panelists led off the session with details about lithium battery incidents that were mitigated before they could become worst-case scenarios.

Todd Coy, Vice President at KBI, described a 600-pounf electrical vehicle battery his facility received for disassembly. One of the workers happened to notice smoke emanating from it, and it turned out to have an external temperature of 1400F. Inside? A charred mess.

“If we hadn’t seen the smoke, we would not have known from the exterior that it had any issue,” said Coy. “This battery could have gone onto a vehicle.”

David Jones of FedEx described a drone with an off-the-shelf battery that caught fire on one of their belts, ejecting flames as far as 30 feet. The incident triggered different consequences for the parties involved.

“If we catch you, we may send a letter or call—it’s sometimes just a mistake,” he said. “But if it’s egregious, we escalate. We can embargo all your freight, and we require a full corrective plan with root cause analysis before allowing you back into the system. The drone company was cooperative and did everything we asked. The battery company? It’s been one and a half years and we still don’t allow their shipments.”.

Regulations on the near and distant horizon

(Full disclosure: Geoff is also a consulting partner on our Services team.)

While it’s been a relatively quiet year for new lithium battery regulations coming into force, panelists had interesting updates about regulations on the near and distant horizon.

Tom Ferguson of Currie Associates talked about the new UN requirement for lithium battery test summaries, scheduled to go into effect in January 2020. He said, “We’re getting a lot of questions about what will happen. Really, nothing. You’re already supposed to have proof that your batteries passed the relevant UN 38.3 tests—that hasn’t changed.

“You don’t need a summary for every model of every device, just for every type of battery. You can choose any form you want to use or create a document yourself.”

George Kerchner of PRBA shared the latest updates from the SAE G-27 Lithium Battery Packaging Performance Committee, which is attempting to define the standards that will allow shippers to once again transport standalone lithium batteries as cargo on passenger aircraft. Long story short, that standard is still years away.

“The committee includes engineers, airlines, pilots and regulators,” he said. “It’s a lot of diversity, so it’s taking longer than everyone anticipated. And we will still have testing once the standard is finalized. Should that package be able to withstand external fire for five minutes, or an oven test? A flight from Loa Angeles to Honolulu is over open water for two and a half hours.”

A controversial working paper at ICAO

Paul Horner of the Dangerous Goods Safety Group (UK) described being introduced to the need for safety risk assessments at age 14 football match, when 56 people were killed in a fire at a nearby football stadium. “It was a wooded stadium,” he recalled, “with spare lumber stored beneath the stands, and people were allowed to smoke.”

That said, he and other panelists expressed concerns about a working paper being discussed at the upcoming ICAO meeting that would place the responsibility for risk assessment of all cargo on the operator or carrier—including cargo intentionally undeclared to avoid cost.

He asked, “So if an airline operates in multiple countries, they must now meet individual state requirements? Post is now the top business-to-consumer choice, and organized criminals abuse that system—the operator has no way of knowing individual customers. We should have concerns with this.”

Ferguson replied, “This is disturbing to me—it’s a shift from shipper to carrier responsibility. It sounds like ICAO is pushing the Chinese model and that’s scary. The operator is more visible and an easier target.”

Jones agreed. “Anybody can throw a package in one of our drop boxes. There’s no face-to-face. How do you conduct a risk assessment on what you don’t know?”

The final words from the 2019 Dangerous Goods Symposium

Does the above exchange remind you of a family holiday? Labelmaster CEO Alan Schoen agrees. He said, “The DG Symposium is like having 300 of your best friends over for dinner. We’ll see you next year, September 9-11!”