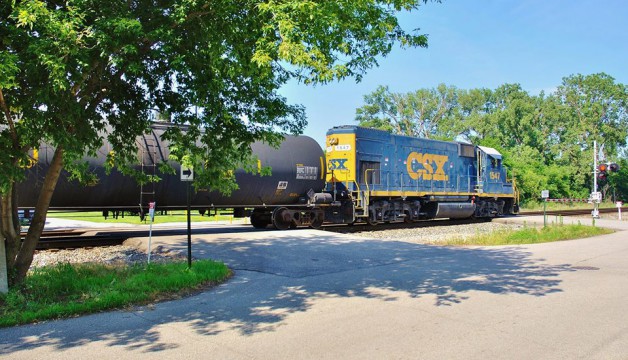 Under a new rule, trains with tank cars carrying poisonous or flammable materials will be subject to additional safety and security requirements. (Image © 7/2015 by Nikki Burgess; used with permission)

After the disastrous Lac-Mégantic derailment on July 6, 2013, the U.S. Federal Railroad Administration (FRA) issued Emergency Order 28 directing U.S. railroads to take certain actions to reduce the likelihood of another unattended train “rolling away” with explosive, flammable materials on board.

On July 29 of this year, the FRA announced the codification of many of the provisions of Emergency Order 28. Under FRA-2014-0032, Notice No. 2, the agency is set to issue a final rule into 49 CFR Part 232 with specific procedures and guidelines.  The rule was published on August 6th.

How will they affect your operation?

The new rule applies to trains that include:

Among other provisions, the rule will immediately require:

The new rule will also require the placement of physical locks on all locomotive cabs by March 1, 2017.

Many of the provisions are common-sense measures that most train operators already observe. But one provision—the requirement for a second employee to verify securement of the equipment—may prove controversial.

Requiring a second crew member is an understandable response to the Lac Mégantic disaster, where a one-man crew allegedly failed to properly secure the train involved in the accident.

But the new mandate for a second employee may amplify the current tension between labor and railroad management over the use of one-person versus two-person crews. While two-person crews may be typical, rail operators concerned with cost containment may not agree that a two-person crew should be mandated for so many types of trains.

ECP brakes or much slower trains?

These new mandates follow other recent U.S. DOT actions, such as the new rules mandating the phase-in by 2021 of electronically controlled pneumatic (ECP) brakes on trains hauling 70 or more cars carrying flammable liquids.

The government claims that such systems, which apply all the brakes on a train simultaneously instead of sequentially, are safer. The industry differs.

This mandate will cost rail operators an estimated half billion dollars and, as one might expect, it has met no small amount of resistance. ECP brake-equipped cars haven’t operated in revenue service beyond some very limited, mainly in-captive-service coal trains.

Operators have rejected an alternative offered by the FRA—operating trains at 30 mph or less instead of equipping them with ECP brake systems—as operationally infeasible. Normal freight train speeds on most well-maintained main line tracks owned by Class One railroads range from 50 to 70 mph, so a 30-mph limit for selected trains on the same lines would send planning into operational chaos.

Make sure your rail shipments are safe and in full compliance, with a full line of solutions from Labelmaster—a full-service provider of goods and services for hazardous materials and Dangerous Goods professionals, shippers, transport operators and EH&S providers.