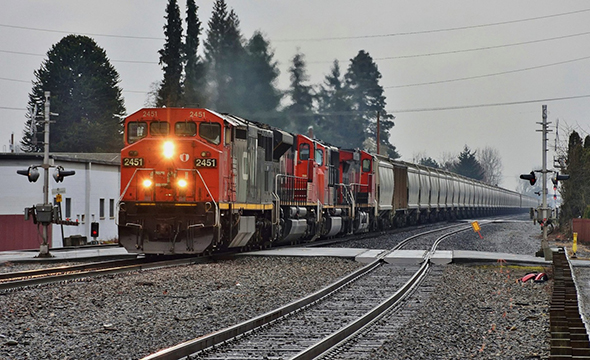 Canada’s Transportation Safety Board made additional recommendations to Transport Canada regarding rail safety this week. A Canadian National train bound for Seattle is seen passing through Kent, Washington on February 18th, 2017. Photo © 2/2017 by Nikki Burgess; all rights reserved.

February wraps up with the “regulatory freeze” still in effect in the United States. As such, new US regulatory activity remains low.  Rumors continue to swirl regarding imminent release of the USDOT/PHMSA HM-215N UN Harmonization; however, as of press time Monday morning it has not appeared and it is not presently on the schedule for publication in the Federal Register for the 28th, either.  The wait goes on.  Meanwhile, here’s what’s new:

As this blog went to press Monday morning, PHMSA released an important memo to the public. It regards enforcement action related to the current situation in respect to the fact that due to the regulatory freeze the US is still operating under the 2015 – 2016 version of the ICAO Technical Instructions (ICAO TI). This is because they are incorporated by reference in the 49 CFR (See 49 CFR 171.7).  Meanwhile the rest of the world has moved on to the 2017 -2018 version of the ICAO TI. This has produced a variety of unintended consequences for shippers, from lithium battery labeling differences to the new name and UN ID number splits surrounding engines and machinery. To a certain degree, confusion has reigned. In its new memo, PHMSA specifically states that:

The memo goes on to note that this standard of enforcement will be exercised by all of DOT’s relevant sub-agencies; FAA, FRA, FMCSA, and PHMSA. The memo should bring at least a measure of welcome relief from the angst that has prevailed in the shipper/carrier communities over how to treat the current and frankly somewhat unprecedented situation.

The full text of the memo can be found here

This is a public document and may be downloaded and printed to provide to carriers or other entities that may have questions about the current PHMSA policy.

The nation’s motor carrier safety agency re-opened the public comment period for its previous notice announcing the application for exemption from several large national motor freight carriers to allow hair analysis in lieu of urine testing for pre-employment controlled substances testing of commercial driver’s license (CDL) holders. The exemption essentially notes that since hair testing is more accurate than urine testing and is in wide voluntary use in the industry, that the current requirement that exists for urine testing is superfluous where hair testing is carried out and represents an unnecessary cost and administrative burden. The Agency re-opens and extends the comment period for the notice of application for exemption; comments are due by April 25, 2017.  Here’s your way to contribute

Do you use aerial lifts as part of your business? The Department of Labor is submitting the Occupational Safety and Health Administration sponsored information collection request titled, ‘‘Aerial Lifts Standard,’’ to the Office of Management and Budget for review and approval for continued use. The OMB will consider all written comments that agency receives on or before March 27, 2017. Here’s where to have your say

In an interesting development for both the regulated transport and emergency response communities, the Center for Disease Control and Prevention has developed the Radiation Hazard Scale as a tool for communication in emergencies. The tool provides a common sense and relatively non-technical guide to response in such incidents that is intended both to quicken local response and provide more user-friendly advice to on-scene personnel.  See the tool here

In the week’s biggest regulatory news and additionally a rather interesting twist given the current regulatory freeze, the US Postal Service is preparing to revise Publication 52, its rules governing Hazardous, Restricted, and Perishable Mail, to provide new mailing standards for lithium batteries to bring it into alignment with both the most current ICAO standards as well as the stalled PHMSA HM-215N regulation.  The proposed actions are summarized below:

The Postal Service must receive written comments on or before March 24, 2017. Here’s your link to comment

A short corrigendum to the newly released ADR 2017 has been released by the UNECE. The document corrects several typographical errors, minor sentence changes, and/or incorrect section enumerations in the latest text.  Here’s your link to the corrigendum

Canada’s Transportation Safety Board issued a recommendation to Transport Canada that it consider further lowering the allowable speed of laden flammable liquid unit trains. The action follows completion of a study regarding a February 2015 derailment and fire involving such a train in Ontario.  See the news here