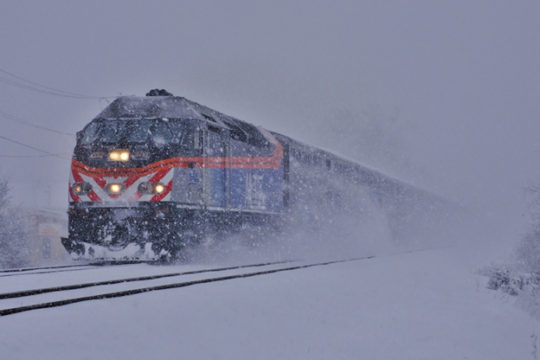 The FRA issued a new Safety Advisory related to operating practices around stations and terminals following rail passenger incidents on the East Coast last year. Here a Chicago Metra commuter train makes heavy going through a snowstorm in Deerfield, Illinois in November of 2015. Image © 11/2015 by Nikki Burgess; all rights reserved.

Welcome to December!  The last month of the year finds us launching into busy holiday preparations and also finds an extra busy past week when it comes to regulatory activity.  Let’s see what happened out there:

In regulatory fallout related to recent incidents involving passenger trains in New Jersey and the Philedelphia area, the FRA is issuing Safety Advisory 2016–03 to stress to passenger and commuter railroads the importance of taking action to help mitigate human factor accidents, assist in the investigation of such accidents, and enhance the safety of operations in stations and terminals with stub end tracks. This safety advisory contains various recommendations to passenger and commuter railroads related to practices intended to help mitigate the occurrence and assist in the investigation of human factor related accidents and to enhance the safety of operations in terminals and stations, especially those with stub end (i.e. “dead end” vice run-through) tracks.  Here’s the notice

OSHA’s National Advisory Committee on Occupational Safety & Health (NACOSH) will meet from 9 a.m. to 5 p.m., Wednesday, December 14, 2016. The NACOSH OSH Professionals Pipeline Work Group will meet from 9 a.m. to 5 p.m., Tuesday, December 13, 2016. Both meetings are in Washington, DC.  You must submit (postmark, send, transmit) comments, requests to address NACOSH, speaker presentations, and requests for special accommodations for the NACOSH and NACOSH Work Group meetings by December 7, 2016.  Interested?  Here’s the way in

In consultation with the Federal Aviation Administration PHMSA proposes to amend the Hazardous Materials Regulations to align with current international standards for the air transportation of hazardous materials. The proposals in this rule would:

In addition to harmonization with international standards, several of the proposals in this rule are responsive to petitions for rulemaking submitted by the regulated community. PHMSA invites feedback regarding these proposed revisions by February 3rd, 2017.  Here’s your route to comment

An amendment entitled Regulations Amending the Transportation of Dangerous Goods Regulations (International Harmonization Update, 2016) was published in Part I of the Canada Gazette on November 26, 2016, for a 60-day public comment period.  The proposed amendment has the following objectives:

The amendment is accessible here.

The Toxic Substances Control Act (TSCA) as amended by the Frank R. Lautenberg Chemical Safety for the 21st Century Act required EPA to publish this list by December 19, 2016. These chemicals were drawn from EPA’s 2014 TSCA Work Plan; a list of 90 chemicals selected based on their potential for high hazard and exposure as well as other considerations.  For further information, see EPA’s page on the issue

Dr. Bob Richard, Executive Director of the Medical Device Battery Transport Council, announced this week that the MDBTC has been granted observer status to the UN Sub-Committee on the Transport of Dangerous Goods.  Dr. Richard said, “This is a great achievement for our organization which will allow us to participate in the work of the Sub-Committee for many years to come.  We will have the active support and participation from all member companies to ensure we provide helpful and technically competent input to the Sub-Committee.”  The MDBTC is an association of companies and regulatory experts who are working together to help solve the complex issues surrounding the use and transport of medical devices and the batteries that power them.  Such batteries provide power to often critical health care devices, but can get caught up in the complex web of restrictions surrounding the transport of lithium batteries, especially via air transport.  For more information on the council and how your company may benefit from membership, contact Dr. Richard at brichard@labelmaster.com

The ICAO Dangerous Goods Panel (DGP) has proposed new competency based training provisions. It is anticipated these new provisions will be incorporated into the 2019-2020 Edition of the ICAO Technical Instructions.  These are now available for review and comment