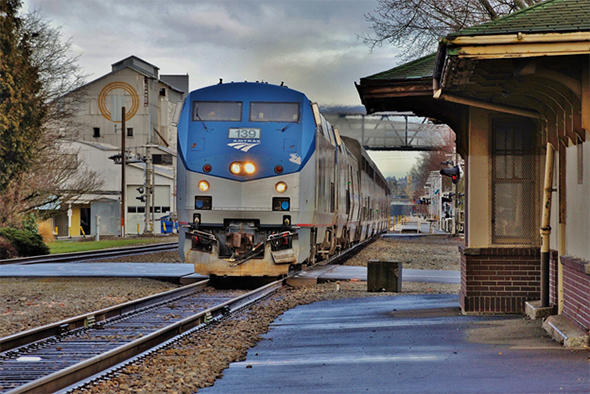 Amtrak’s “Coast Starlight” train from Seattle to Los Angeles roars across the grade crossing at Meeker Street in Kent, Washington on Sunday, February 19th, 2017. Sadly, Kent, with its many crossings is the site of numerous train/vehicle accidents. The FRA has begun a new campaign to reach younger motorists and warn them of the danger involved in ignoring crossing warnings. Image © 2/2017 by Nikki Burgess; all rights reserved.

Today marks the beginning of the second month of the “regulatory freeze” order by the new Trump Administration.  Action in the field remains at a low level as the often brand-new leadership in the various federal agencies goes about reviewing the current status of their respective departments’ projects.  On the DOT front, speculation continues over the plans for the HM-215N UN Harmonization.  A flurry of rumors circulated last week suggesting that publication is imminent, with some sources predicting issuance by last Friday—a day that has of course now come and gone with no appearance by the rule.  Today is the President’s Day federal holiday, and the Federal Register still presently lacks any sign of the harmonization in it.  At least for now, we all remain in “wait & see” mode.   Nevertheless, we’ve covered the action that has taken place for you:

In a release which may be of some interest in the new administration, the (draft) Inventory of U.S. Greenhouse Gas Emissions and Sinks: 1990–2015 is now available for public review. Annual U.S. emissions for the period of time from 1990 through 2015 are summarized and presented by source category and sector. The inventory contains estimates of carbon dioxide (CO2), methane (CH4), nitrous oxide (N2O), hydrofluorocarbons (HFC), perfluorocarbons (PFC), sulfur hexafluoride (SF6), and nitrogen trifluoride (NF3) emissions. The technical approach used in this report to estimate emissions and sinks for greenhouse gases is consistent with the methodologies recommended by the Intergovernmental Panel on Climate Change (IPCC), and reported in a format consistent with the United Nations Framework Convention on Climate Change (UNFCCC) reporting guidelines.  The document is then used for policy planning considerations.   EPA requests recommendations for improving the overall quality of the inventory report to be finalized in April 2017, as well as subsequent inventory reports.  Please submit your comments by March 17, 2017. Find out more here

The nation’s railroad safety agency launched a new campaign to improve grade crossing safety.  The “Stop; trains can’t!” ad targets younger motorists and encourages them to act cautiously at railroad crossings. It debuted on the popular internet YouTube service.  The campaign is the latest in a two-year effort by the agency to reduce accidents and fatalities at railroad crossings around the country. The National Highway Traffic Safety Administration (NHTSA) has partnered in the nationwide effort.  See the new ad here