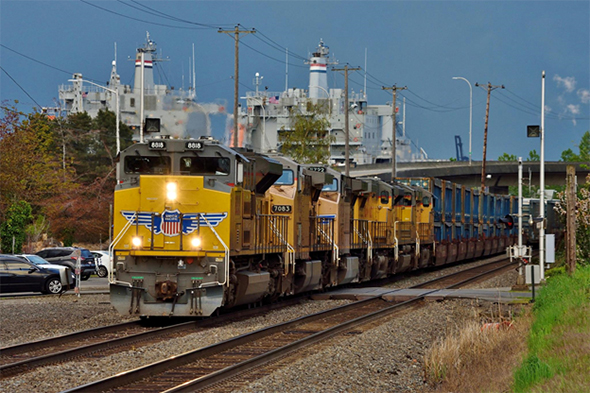 The FRA is further delaying its new safety rules; a continuing effect of the new administration’s focus on reduced regulatory activity. A Union Pacific freight train passes through Tacoma, Washington, on April 30th, 2017. Image © 4/2017 by Nikki Burgess; all rights reserved.

As we roll towards the end of May and the beginning of summer, regulatory activity continues at a slower pace than had characterized the previous several years as federal agencies retool to meet the new administration’s much reduced focus on the subject.  How will that play out long term?  Stick with our weekly blog, and we’ll keep you up to date!  Meanwhile, here is the week’s latest and greatest:

In the week’s biggest news, the International Civil Aviation Organization released a revised set of “state variations on May 19th, with most of the having an effective date of April 24th.  State variations are the differences that various nations create between the standard text of the ICAO technical Instructions (for shipping and handling dangerous goods) and their own rules that account for their potentially differing national priorities.   Expect IATA, the International Air Transport Association whose Dangerous Goods Regulations (DGR) represent the most commonly used book of rules for air carriers and shippers by air, to quickly reflect the new variation in their own text.  The biggest change for the US audience?  US Variation 13 now incorporates the new UN numbers UN3528 and UN3529 to allow for the shipment of these engines under the US 13 exceptions.  This will be very helpful for carriers, although impact to shippers is minor.  See the revised variations here

For more on the revision, see my colleague Neil McCulloch’s brand new blog on the subject right here

The Department of Homeland Security and the Federal Aviation Administration continue to work with their EU partners to consider an expanded ban on the carriage of personal electronic devices in the passenger cabin of commercial aircraft.  Such devices have been much in the news lately as potential sources of improvised explosive devices, or IED’s.  US officials are considering expanding the present ban on carriage that affects most Middle Eastern originating flights to flights coming from Europe.  EU officials worry that such a ban will impose massive disruption to transatlantic travel.  Bloomberg reports on the latest right here

The nation’s safety agency is issuing a comment period for an ICR related to powered platforms for building maintenance—a long way to say “scissor lifts.”   Such lifts are common currency in industry, offering safe and convenient acces to overheads and other high fixtures.  However, the lifts come with their own set of risks as well, especially for the unwary or poorly trained.  OSHA is working to address some of these issues via potential expanded training rwquriments.  See the ICR here

The agency issued a further stay of the “System Safety Rule” which would have imposed new mandates on freight and passenger railroads to create and maintain expanded safety plans.  Originally planned to become effective last winter, the new stay extends the hiatus until June 5, 2017.  See the story here