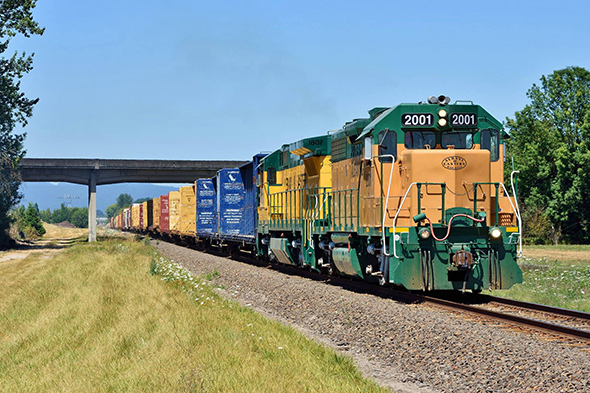 Under a new Surface Transportation Board proposal, shippers may get new authority to request “reciprocal switching” from rail carriers. This could make short line railroads like Oregon’s Albany & Eastern bigger players in serving as fee-for-service bridge carriers between the Class One roads. Image © 7/2016 by Nikki Burgess; all rights reserved

August is now in full swing, and the summer doldrums have, at least to a degree, struck the regulatory scene.  It was a quiet week, in so far as it goes.  However, here are the highlights, which do contain several items of interest:

Although it isn’t often thought of as such, the US Postal Service carries no small amounts of Dangerous Goods. Consequently, it has its own set of hazardous material regulations, known as Publication 52. Innocuous name for an important book!  The USPSO has released a summary of recent changes to this publication.  Here is a link to the new summary

Although not directly related to DG Transport per se and of more of a financial/operational nature, the STB released a very interesting proposed rule in reference to the concept of “reciprocal switching.”  This concept allows one railroad to serve a customer on another railroad through the payment of fees to the line owner to do the end point switching for the contracted carrier.  Railroads in general are not typically in favor of this concept, contending that it will infringe on their rights as proper and franchise holders.  The new rule, if implemented as written, will significantly increase competitive options for bulk shippers, including, of course, those shipping hazardous materials.  The new rule proposes allowing reciprocal switching if:

The FMCSA released its annual update to the Hazardous Materials Route Registry (HMRR), which (unsurprisingly) is a list of the approved road transport routes that motor carriers are allowed to use to transport regulated hazardous materials.  Here the new update

Health Canada has released the first part of its intended technical guidance on how to implement its version of the GHS, which is being incorporated in workplace hazard communication rules in Canada in much the same way that OSHA incorporated the GHS into our own Hazard Communication Standard.  Part II of the technical guidance is anticipated for release this fall.  Here is the link to request Part I

The National Institute of Occupational Safety and Health has released a new database of engineering controls intended to assist employers to reduce the number of workplace injuries.  Engineering Controls follow administrative controls and precede Personal Protective Equipment (PPE) in the order of precedence of actions to be taken by employers in mitigating workplace hazards.  Here’s the link to the new database

The U.S. Environmental Protection Agency released a waste and materials tracking feature in its Energy Star Portfolio Manager, an agency sponsored no-cost benchmarking and tracking tool for commercial building owners and managers. The tool is intended to help smaller business more comprehensively track energy usage and waste production in an effort to promote further conservation of resources.  Here’s your way in