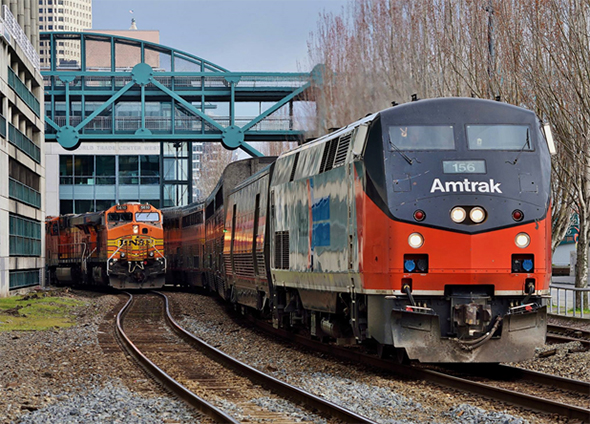 The American Association of Railroads released new safety data showing that over 99.9% of hazardous materials arrive at their destinations without any release or accident. Here Amtrak passengers and BNSF freight coexist peacefully and safely in downtown Seattle, Washington on Saturday, April 8th, 2017. Image © 4/2017 by Nikki Burgess; all rights reserved.

The second full week of April fins the nation sliding into the full bloom of Spring—hopefully your local garden is beginning to blossom as well!  It was a fairly routine week in the regulatory world after last week’s big release of the HM-215N.  Here’s a few of the highlights:

The Trump administration moved forward with its plan to revise or even scrap the EPA’s “Clean Power Plan,” an emissions protocol which was instituted during the Obama Administration and would have significantly changed both emissions limits and air treatment practices in the power industry, especially in regards to the use of coal.  Formal notice of the review appeared in the Federal Register this week.  See the proposed revisions here

The FMCSA announced a public meeting to discuss the technical specifications in 49 CFR Part 395, Functional Specifications for All Electronic Logging Devices (ELDs), as published in the ‘‘Electronic Logging Devices and Hours of Service Supporting Documents’’ Final Rule (ELD Rule). This meeting will   discuss the minimum requirements for ELDs and is being held to help manufacturers produce ELDs that will comply with the ELD Rule.  The meeting will be Tuesday, May 9, 2017, from 9:30 a.m. to 1:30 p.m., Eastern Time. Here’s your link to take part

This adjunct body to OSHA and DOT is charged with helping investigate and determine mitigating responses to accidents and incidents in the nation’s chemical manufacturing and transport infrastructure.  It will hold its next public meeting on April 13th.  The board is presently a candidate for elimination under the new Trump Administration’s proposed FY 2018 budget.  See the meeting particulars here

Our northern neighbor’s analog to USDOT released proposed revisions to its marine DG transport standards, which have not undergone significant change since as far back as 1992.  As one might thus expect, the proposal is extensive.  Comments are due by May 1st, 2017.  See the proposal and a way to submit comments here

EASA chimed in with its own concern about personal electronic devices riding in the cargo holds of more commercial jets—this, additional fallout from the recent “PED” ban on such equipment being in carry-on luggage in flights from certain mainly Middle Eastern airports instituted by both the US and UK.  As you may have already guessed, EASA is worried about the potential for increased risk of fire in the holds posed by the lithium batteries that often power such devices.  Thus Scylla and Charybdis finally meet in the world’s aviation safety structure.  See EASA’s thoughts on the matter here

The American Association of Railroads released new data reporting that over 99.9% of hazardous materials shipped by rail arrive at their consignee without a train accident related release.  The industry is pushing back against persistent efforts to paint its hazmat delivery structure as unsafe.  See the new data here