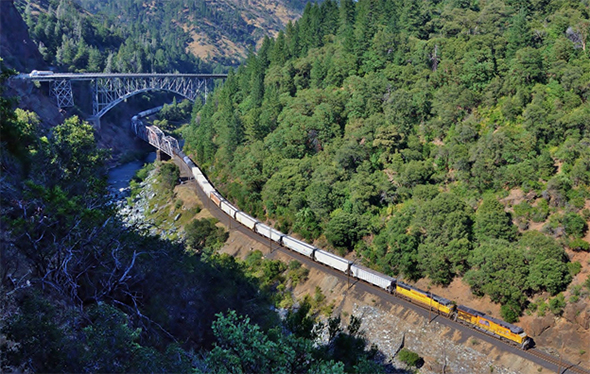 The State of California is attempting to impose local taxes on the carriage of dangerous goods by rail. A Union Pacific mixed freight at Pulga in California’s Feather River Canyon in July of 2016. Image © 7/2016 by Nikki Burgess; all rights reserved.

Ever since the Lac Megantic derailment disaster in 2013, North American rail carriers have been engaged in a running administrative battle with assorted local municipalities that have tried, so far without success, to impose local taxes or fees on the carriage of dangerous goods over the railroads that pass through their communities.

This is an issue for several reasons.  The railroads are common carriers—they are legally obligated to carry any cargo legally proffered to them for transport; they cannot say “no” to compliantly offered dangerous goods.  The railroads themselves are private companies, and the rights-of-way that they operate over are their own private property, different in kind from the publicly funded roadways and canals that common carrier truck and barge lines operate over.  Finally, their operations have, via numerous examples of litigation, been very clearly defined as falling under the aegis of the Interstate Commerce Clause of the federal constitution.  The clause states that “the United States Congress shall have power to regulate commerce with foreign nations, and among the several States, and with the Indian Tribes.”  This federal primacy has always been broadly applied to the railroads, preventing local interference.

Now however, a rather more serious issue has arisen.  The State of California has passed a new tax law under California Senate Bill 84

The bill was signed into law by Governor Jerry Brown on June 24th.  The operative relevant terms can be found in this summary from the state itself:

This bill would require the Director of Emergency Services to establish a schedule of fees to be paid by a person owning any of the 25 most hazardous material commodities that are transported by rail in California. The bill would require that the fees be fair, as required by the federal Hazardous Materials Transportation Act, and state the intent of the Legislature that the schedule of fees reflect the proportionate risks to both the public safety and the environment resulting from a release of hazardous materials and the expense of preparing to respond to those risks. The bill would authorize the director to exempt from the fee a shipment of hazardous materials that meets certain criteria and prohibit the collection of fees in excess of the reasonable regulatory costs to the state. The bill would require the director to consider adjusting the fee not less frequently than every 3 years.

Perhaps unsurprisingly, the “top ten” on the list also reads like a who’s who list of the most common hazardous materials carried by rail.  The current iteration of the law will impose a $45 + 5% administrative fee per rail car or container carrying ANY amount—any—of a listed hazardous material.  Theoretically, that could mean that a container carrying a box with one six ounce jar of oil samples (UN/NA 1993, UN1267, etc) in it would face the same fee as a rail tank car carrying thousands of gallons.  The railroads would be responsible for collecting these fees and remitting them to the state.  The potential cash cow available to the state is obvious.  The cost impact to shippers is equally so.

The railroads, with BNSF Railway and the Union Pacific Railroad (the two largest rail freight carriers in the state) in the lead, have filed suit (BNSF Railway Co. v. California State Board of Equalization, N.D. Cal., No. 16-cv-04311-JCS, 7/29/16) against California in federal court, seeking to have the law stayed.  They contend:

The case has yet to be heard.  A state has never been allowed the authority to do what California intends to do in this case.  The state contends that the tax is not a tax on the railroads per se, but on shippers, and that since the shippers operate in California, that it has the authority to impose the tax.

Pandora’s Box here is that if this tax law stands, it will set a precedent that would effectively allow ANY state, and potentially local municipalities—though that is more of a stretch, since case law already exists in that circumstance—to impose local taxes on the carriage of dangerous goods (and conceivably, other products, one can suppose) through their boundaries.  The impact on both cost to ship and the administrative bureaucracy necessary to handle the sheer volume of activity could be very large indeed.

The new law and its attendant fees are scheduled to take effect on October 1st, 2016.  BNSF Railway has warned its customers of the potential for the increased costs if the fees stand.  Watch this space for updates as the deadline moves closer.