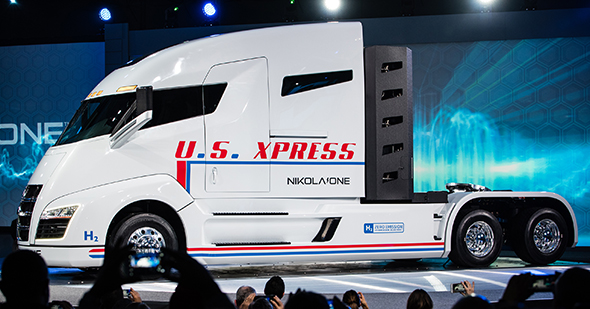 A few weeks back, we wrote about the pros and cons of autonomous trucks hauling hazmat. But while autonomous vehicles get all the headlines these days, there are lots of new technologies and innovative approaches poised to transform trucking as we know it.

Some of these innovations are already here; some may be many years off. They all have the potential to be breakthroughs.

We’ve assessed a few of them from a Dangerous Goods perspective—asking how each will affect haulers of hazardous materials as opposed to shippers with more general needs. Here’s the scoop:

Once Tesla made electric cars cool, it was only a matter of time before someone started talking up electric trucks.

That someone is Nikola Motor Company, which made headlines in 2016 talking about a 2000-hp, natural gas turbine/electric hybrid semi. Now they’ve shifted focus to a pure electric motor, powered by a hydrogen fuel cell and high-density lithium batteries, which they expect to produce by 2020.

Sounds cool, and the prototype is stunning. But couldn’t they come up with a more original moniker than just borrowing Nikola Tesla’s first name?

DG Assessment: Considering all the grief lithium batteries cause as cargo, we’re not so sure we want them in the front of the truck as well as the back. Then again, diesel fuel is a regulated material (UN 1202), too, and the industry has somehow survived all these years.

The all-electric rig is years off, but you can give trucks hybrid technology today with an ingenious system from a French startup called Adgero.

The Adgero system relies on an electric, trailer-mounted motor that drives one of the rear axles, controlled by a control unit in the tractor. Regenerative braking recharges the motor’s capacitors. The company claims 15-25% improvements in fuel efficiency, along with reduced emissions.

DG Assessment: We love the idea, but have some reservations. You could probably concoct a worst case scenario with an overheating fuel cell underneath a trailer full of Class 3 Flammables.

Every trucker knows that two trucks drafting closely—a.k.a. tailgating—both save fuel. But running in close proximity is also more dangerous.

California-based Peloton may have a solution—a semi-autonomous system that combines radar-based collision-mitigation systems with vehicle-to-vehicle (V2V) communications to allow the rear truck in a platooning pair to react instantly to the actions of the front truck.

The company claims trucks accelerating and braking together at closer distances create a 7% boost in fuel economy, with greater safety.

Turnover is a problem for almost every trucking company, and probably always will be. But Iowa-based Workhound promises to boost retention through driver feedback and analytics.

The Workhound software platform encourages drivers to share feedback, then aggregates it into data carriers can use to make their drivers’ experiences better. The company points to a 6-month case study in which a carrier cut turnover by 16%, saving more than a half million dollars.

DG Assessment: What’s not to like? Anything that keeps drivers on the job longer creates safer roads for everyone.

Have you encountered a new trucking technology that’s worth talking about? Leave a comment and tell us about it!