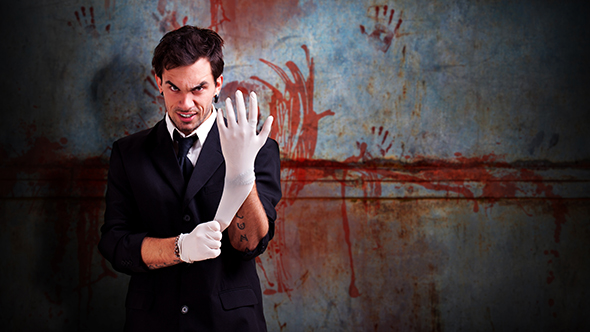 Here at Labelmaster, we scrutinize TV shows for correct hazmat labeling. We watch major football games through a hazmat-tinted lens. We even halfway believe Game of Thrones is actually about hazmat.

Clearly, we are not normal people. And most scary movies are made to scare normal people. So we got to thinking, what if someone made horror movies designed to scare Dangerous Goods professionals? What would those movies be like?

Here are our answers.

The Silence of the Flams

A young DOT inspector is trying to catch a repeat offender who ships flammable liquids non-compliantly—but to catch him, she needs to match wits with a former Dangerous Goods trainer notorious for using flammable liquids for unspeakable purposes, with fava beans and a big chianti.

Employees at PHMSA headquarters sometime fall asleep at their desks. (Who doesn’t?) But their nightmares about a legendary regulator start to come true in horrifying ways, as the 49 CFR is suddenly slashed through with clear, unambiguous guidelines in simple English.

The night manager of a 24-hour freight forwarding facility shies away from daylight, speaks with a vaguely European accent, and sucks the life blood from his coworkers with rambling, excruciatingly long stories about usages for bat guano.

We all know there are only twelve chapters of the 49 CFR—or are there? In this flick, teenagers at summer camp are hunted by an un-killable former camper who’s discovered the top-secret 13th chapter, redacted by the Department of Homeland Security because it governs waterborne substances that re-animate the dead.

Night of the Living Deadline

In the late hours of May 31, 2016, chemical plant workers affix new GHS hazcom labels to drums and packages to meet the June 1 compliance deadline. By daybreak, their tireless efforts leave them looking gaunt and hollow-eyed, and the morning shift fears the zombie apocalypse has begun.

A video tape, found in a remote Maryland forest, appears to depict the last abdominal x-rays of a group of teenagers who thought they were swallowing harmless barium sulfate. A supernatural presence, however, may have substituted barium chlorate, with predictably horrifying results.

One teenager after another is silenced by a strange kid who never speaks—except to describe in excruciating detail every nuance and exception in the Toxic Inhalation Hazards tables. He’s finally stopped by a neighbor brandishing the 2016 Emergency Response Guidebook, who mandates he maintain a safe distance.

A mad scientist attempts to create life by combining different ammonia derivatives. His creation comes to life, with tragic and unintended consequences, and is hunted down by raging bureaucrats who seek to destroy what they cannot regulate.

Hazmat compliance can seem scary, but fear not! Labelmaster is a full-service provider of goods and services for hazardous materials and Dangerous Goods professionals, shippers, transport operators and EH&S providers. See our full line of solutions at labelmaster.com.