There was a bustle of activity on the hazard communication front in 2013 as companies scrambled to meet a December 1st federal deadline to train their employees in the required elements of the updated Hazard Communication regulation which fully embraced the Globally Harmonized System of Classification and Labeling of Hazardous Chemicals, or as it is more commonly referred to, the GHS.  Issued in March of 2012 and effective in May of that year, the new rule greatly modified the 29 CFR 1910.1200 to conform it to the UN model for Hazard Communication.  However, generous transition deadlines were included, since the law in many ways represents the most radical shift in the hazcom world enacted since the law’s initial genesis in 1983.

The next deadline looms now!  It is June 1st, 2015, and requires companies that manufacture hazardous chemicals and fill containers to have GHS compliant labels applied on such filled containers on and after that date.  They may not ship containers lacking this labeling from that point, with distributors under the same onus as of December 1st of the same year. (The lag in the two dates allows for the depletion of existing stock by distributors).  Below is a table to serve as a reminder of the due dates for the various deadlines associated with this new law: 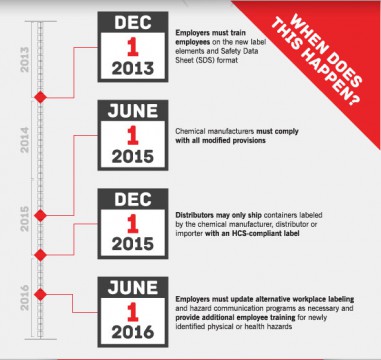 Based on the input of questions and the need for clarifications expressed by our customers to us via our sales and customer service staff, it seems that for many, the new deadline is only now beginning to evoke serious contemplation.  Labelmaster’s regulatory staff, author included, has been busy helping people to better understand the requirements of the new law and how it works.  Much confusion seems to center around understanding the difference between transport-related labeling, and hazard communication labeling.  The two present similar appearances in many respects, however their intended purposes are quite different.  Based on the questions we have received, we think it might be helpful to reiterate the differences.

Transport labeling is intended to be applied to packages which are being shipped from one point to another; from New York, let us say, to Chicago.  It applies to the outer package – that package which is being used simply to ship the product from one point to another.  In the United States and its territories, the rules governing the required labels, markings, and other information associated with such shipments appear (as a general rule and for most items) in the 49 CFR, parts 171 through 180.  This set of regulations is governed by the Pipeline and Hazardous Materials Safety Administration, or PHMSA, an arm of the US Department of Transportation (USDOT).  Other and fairly similar rules that apply to many shipments by air or by maritime carriers are governed by the International Civil Aviation Organization (ICAO) and the International Maritime Organization (IMO).  All of these rules are based on more-or-less broadly internationally agreed to “model” or example regulations promulgated by the United Nations, and with rare exceptions are recognized to one degree or another worldwide.  Nations are allowed to and often do impose additional regulations or limitations on the ICAO and IMO regulations to suit their own differing or more highly prioritized national requirements; for instance, in the United States, rules regarding the shipment of Lithium batteries and materials toxic by inhalation feature somewhat more strict rules than those that appear in the international regulations of ICAO and the IMO. These changes are handled by a set of notices called “variations” which appear in whatever set of regulatory rules that they apply to.  Transport labeling is intended to protect the shipment and to inform people of its contents while it is traveling.  The labels (and/or placards, depending on the size and mode of the shipment) feature the familiar nine hazard classes (some of which have different divisions or sub-classes); explosives, gases, flammable liquids, flammable solids, oxidizers and organic peroxides, toxics/poisons, radioactives, corrosives, and miscellaneous hazards, thus: 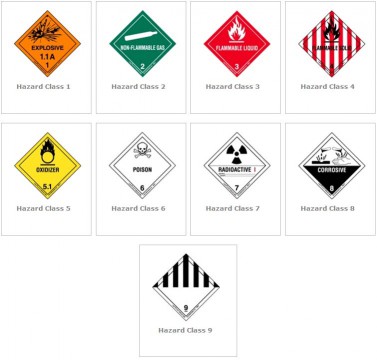 These labels have all been in service for many years, and it is very important to note that the new OSHA/Hazcom rules have no impact on the rules governing their display and/or use; instead, as noted above, the use of these labels and their display in transport operations when required is governed under the Hazardous Materials Regulations found in the 49 CFR.

Hazard communication labels, on the other hand, are intended to be applied to those containers which will be used in the workplace—containers that employees will handle and work with on a routine basis.  The rules governing the use and display of these labels are the province of the Occupational Safety and Health Administration, or OSHA, an arm of the US Department of Labor (USDOL).  They appear in the 29 CFR 1910.1200.  More often than not, the inner “shipped container” which the hazard communication label will be applied to, and the “outer package” which is used to ship (or “transport”) the inner container to the place where it will be used, are not the same thing.  There are cases which are exceptions; for instance, the ubiquitous 55-gallon steel drum is typically found in use both as an outer container used to transport the material to the workplace where it will be used and as the shipped container which will actually be used in the workplace—it is often a “single package” and as such is one of the rare items which may have both types of labeling applied to the same container.  However, this is the exception, not the rule.

Hazard Communication labeling features several pictograms, or graphics, which are very similar to the pictograms featured on transport labels, and are used to warn workers of similar hazards—a not unexpected outcome, after all!  They are also required (at least for shipped containers, although black frames may be used in workplace only containers, which we will address below) to be displayed within a red framed square on point (or diamond) shaped label.  This diamond shape is one which has long been associated with the hazard labels used for transport.  So, it is understandable that people may be just a little confused over “which is which.”  Here are examples of the GHS pictogram labels (please note that the pictograms are not shown with red frames in the table here, as would be required on actual labels): 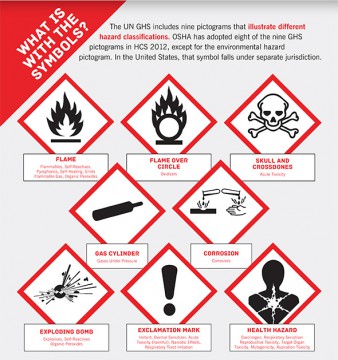 These pictograms form only one of the six required elements which must appear on a fully compliant hazard communication label.  Those elements are:

Also, unlike transport labels, whose dimensional size is strictly governed, hazard communication labels may appear in nearly any size, although they must of course be of sufficient size to remain legible—a potential issue when dealing with very small containers!  Here is an example of what a fully compliant label for use in the United States under the OSHA regulations may look like.  This training example is for a fictional chemical and delineates the six legally required elements, along with displaying an optional first aid statement: 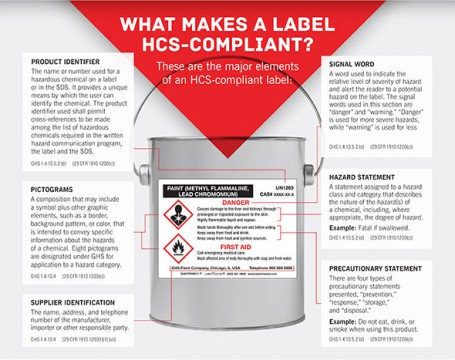 Note that this example label does present the pictograms within their required red frames.  An exception allowing the use of black frames exists, but it is only valid for secondary “workplace only” containers, which are the containers which many workplaces use to transfer materials into from a larger shipped container—for example, a worker might pump a smaller amount of cleaner or solvent into a secondary container from a large drum, as we mentioned above.  The “single employee, single shift” exception which allows the use of an unlabeled container with contents sufficient only for the use of one employee on one work shift and may not be used to store or transfer the material also remains in place.  The rule also allows the use of differing hazard labeling systems within the workplace only environment provided that:

Please consult the 29 CFR 1910.1200 for specifics as they may apply to your workplace or operations.  Also note that modifications to the rule may appear in either of two ways; most commonly, a notice may appear in the US Federal Register, which is the “update” of federal regulations and other business published daily by the federal government; or, on rare occasion, via a “Letter of Interpretation” issued by OSHA, in which they make a specific answer to an inquiry from the public regarding the correct interpretation of the regulations.

The requirement that many companies face to use and understand both transport and hazard communication labeling may initially seem quite daunting.  However, it is not, once one has a solid understanding of the process, and can appreciate how much more information will now be available to workers to help them stay safe.  For those who may wish to garner more information about the GHS based hazard communication regulations, how they work, and what is required to ensure compliance, Labelmaster is pleased to have available both a white paper and a series of four no-cost webinars explicating the process and requirements in no small detail.  Simply go to our “GHS Landing Page” at:

You will find the webinar links towards the bottom of the page.  We hope that you will also take a moment to look over the page, featuring the many products and services that we offer to assist our customers in complying with these important regulations.  In the meantime, that clock keeps ticking…12 days left.  Don’t let it run out on your operation!