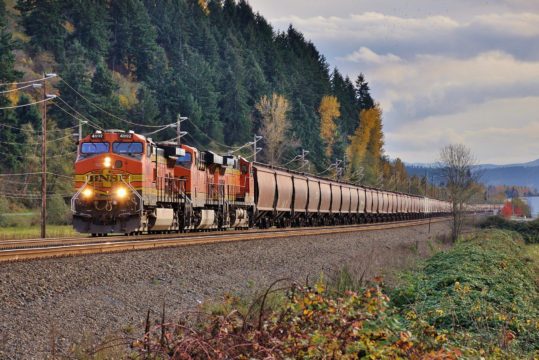 The Federal Railroad Administration is engaging in a new study that will examine crew workloads in an effort to implement operating procedures and technologies that will help to mitigate distractions for operating employees. A BNSF train enters busy trackage near the large yard in Auburn, Washington on November 6th, 2016. Image © 11/2016 by Nikki Burgess; all rights reserved.

Just in case you got to work an hour early this morning, remember—we “fell back” an hour.  On the good news side, it gives you plenty of time to catch up on the latest and greatest in the world of regulations.  With Tuesday’s general election looming, the last week saw relatively limited action as the government geared up to deal with one of the more contentious contests in recent memory.  Nevertheless, we’ve covered the major points for you:

In its ongoing quest to improve safety for train crews and the public, FRA is proposing a study which will focus on railroad engineer performance. The agency contends that distraction is a common problem in locomotive cabs and their preliminary research suggests that the dispatch radio may have significant effects on crew workload and performance. Anecdotal evidence from train engineers indicates to the agency that the radio is the most distracting technology in the cab. There are generally two categories of dispatcher-engineer communications. Some require immediate action and should be provided in the usual manner (over the radio). However, others do not require immediate action and could be provided as a written message. FRA seeks to develop an understanding of how the dispatch radio communications could potentially lead to human-performance degradation in the railroad engineer, and if a Head-Up Display (HUD) like those used in aircraft would be an alternative and superior technology to communicating information usually conveyed over the dispatch radio.  See the study plan here

Many of us fly for our companies—insert YOUR horror story here!  The USDOT has issued a new rule focused on mandating certain additional protections for the flying public, and while it is not specifically DG, transport, or HS&E related, everyone who gets on an airplane for business or for pleasure will certainly be interested.  Briefly, the rule is meant to make the financial aspects of securing air transportation more easily understandable and transparent to comparison shoppers, and to make clear when more than one carrier is involved in a flight sequence.  See the new safeguards here

On October 19th, the agency released a very interesting Letter of Interpretation referencing training requirements in certain cases of very limited interaction with hazardous materials.  Note in particular how they treat employees not considered to be “hazmat employees.”  See the guidance here

The nation’s top safety watchdog released 2015 accident and illness data, and was pleased to announce another solid decline in rates across the spectrum of industries.  This makes twelve of the last thirteen years that such rates have declined—assuredly good news for US workers.  See the details right here

The agency issue the most recent revision of its guidance plan for Control Techniques Guidelines (CTG) for the Oil and Natural Gas Industry (EPA 453/B-16-001). It furnishes state and local agencies with information to assist them in reaching determinations for so-called “reasonably available control technology (RACT)” for volatile organic compound (VOC) emissions from various petrochemical industry emission sources. The CTG is effective from 10/27/2016.  Find it here