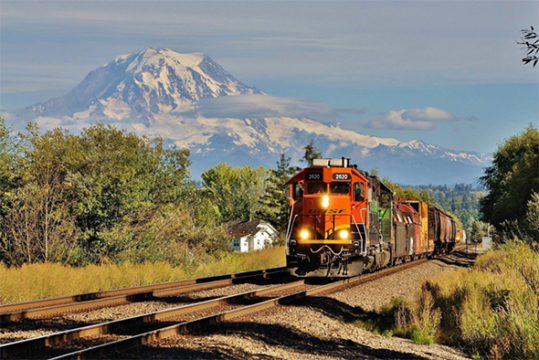 The FRA continues to focus on Positive Train Control (PTC) implementation with a new push to speed progress as well as the release of more grant funding. A BNSF train speeds along main line track that will be part of the PTC network near Puyallup, Washington beneath Mount Rainier. Image © 8/2016 by Nikki Burgess; all rights reserved.

Ready for another week?  Although August can be a slow month in the regulatory world as much of Washington, DC takes time to avoid the sticky heat and humidity in the nation’s capitol, this week was nevertheless quite busy.  Here’s all the latest and greatest:

The US Chemical Safety Board has issued a safety alert following its investigation of a fatal 2010 explosion and fire at a refinery in Washington State.  The CSB blames an elderly carbon-steel heat exchanger in the refining process, and recommends that similar operations and equipment be inspected for analogous potential damage as soon as possible.  See the alert here

In a newly released letter of interpretation, PHMSA clarified that 31HZ1 type IBC’s are in fact reinstated as authorized under IBC codes IB4 through IB8. Their exclusion for solids seems to remain, according to the letter.  See here

A status update released by the FRA underscores the need for railroads to implement Positive Train Control (PTC) as quickly and safely as possible, according to the agency. The update also highlights the Obama  Administration’s repeated calls for Congress to provide more significant funding to assist commuter railroads in implementing PTC.  “Positive Train Control should be installed as quickly as possible,” said U.S. Transportation Secretary Anthony Foxx. “This is lifesaving technology available now, and railroads should continue to aggressively work to beat the deadlines Congress has put in place.”  The new status update includes railroad-by-railroad quarterly data as of June 30, 2016, on track segments completed, employees trained, radio towers installed, route miles in PTC operation and other key implementation data. In March, FRA announced that it intended to require railroads to submit quarterly reports to FRA on their progress toward completing PTC implementation. In concurrent news, FRA also announced the availability of millions more dollars in grant money to help fund this mandate.  See both items in the links below:

In potentially interesting employment news for younger military veterans, the FMCSA proposed a pilot program to allow a limited number of individuals between the ages of 18 and 21 to operate commercial motor vehicles (CMVs) in interstate commerce if they have received specified heavy-vehicle driver training while in military service and are sponsored by a participating motor carrier. During the 3-year pilot program, the safety records of these younger drivers (the study group) would be compared to the records of a control group of comparable size, comprised of drivers who are 21 years of age or older and who have comparable training and experience in driving vehicles requiring a commercial driver’s license (CDL).   See the program specifics here

In news from north of the border, Canada’s analog to PHMSA released a new “FAQ” page which answers what the agency believes are some of the more common recent questions regarding DG handling in the country.  See the new FAQ page here