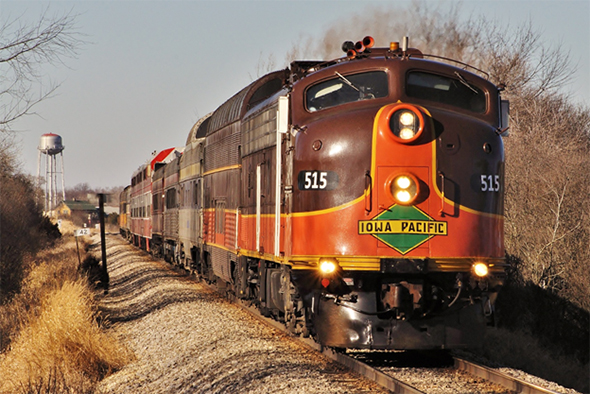 A new FRA information collection request will address the issue of proper monetary threshold levels for rail safely reporting. Even small operations may be affected. An Iowa Pacific excursion train races the winter sun in Round Lake Beach, Illinois in December of 2014. Photo © 12/2014 by Nikki Burgess; all rights reserved.

Happy Daylight Savings Time!  Hopefully the famed “National Jet Lag Day” has not caused you too much angst.  Statistics show that the Monday following the “Spring Forward” time shift is a peak day for traffic accidents, so please be extra careful.  Regulatory activity continues at fairly low ebb, although it does seem to be slowly increasing.  Rules being published are still “few and far between,” however.

HM-215N watch: the nation’s UN DG harmonization rulemaking remains on hold.  A bout of rumors had the rule primed to publish last week, but Friday came and went with no appearance.  The wait goes on…

The Department of Labor is submitting the Bureau of Labor Statistics sponsored information collection request (ICR) revision titled, ‘‘Survey of Occupational Injuries and Illnesses,’’ to the Office of Management and Budget (OMB) for review and approval for use in accordance with the Paperwork Reduction Act (PRA) of 1995. The OMB will consider all written comments that agency receives on or before April 6, 2017.  Here’s your way in

In accordance with presidential directive the agency announced its intention to review and rescind or revise the Clean Water Rule. In 2015 the agency issued the ‘‘Clean Water Rule: Definition of ‘Waters of the United States.’ ’’ Due to concerns about the potential for continued regulatory uncertainty, as well as the scope and legal authority of the rule 31 states and a number of other parties sought judicial review in multiple actions. On October 9, 2015, the U.S. Court of Appeals for the Sixth Circuit stayed the 2015 Rule nationwide pending further action of the court. On February 28, 2017, the President of the United States issued an Executive Order directing the EPA to review and rescind or revise the 2015 Rule. See the plan here

The nation’s rail safety agency issued a request for comment regarding a change to its information collection requests (ICR) in reference to the monetary threshold that an incident must cross in order to become reportable to FRA.  The American Association of Railroads (AAR) is working with the FRA to ensure that the threshold makes economic sense in terms of balancing the need for the agency to know about incidents impacting safety with the administrative burden that may come with making the threshold too low.  Here’s your portal to comment

Austria and Germany have concluded a multilateral agreement under the ADR system (See ADR M303) that will allow the two nations to implement certain new guidance in reference to dealing with what might best be called “return logistics” level lithium batteries at the private individual level.  The agreement aims at helping implement a new Special Provision (SP 670) generally in the 2019 ADR.  ADR 2017 has only just entered into force, so the new SP remains a goal for now.  Here is a link to the English text of M303