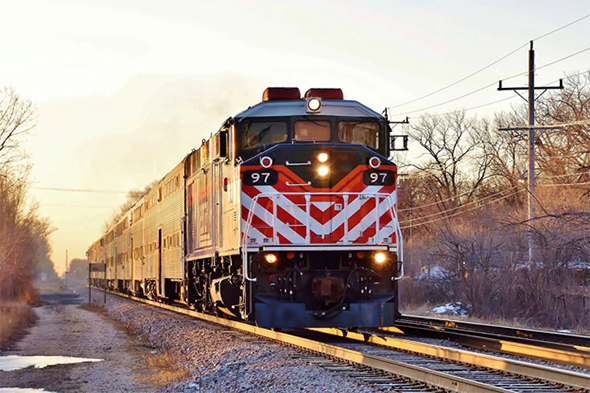 The Federal Railroad Administration (FRA) has extended the comment period for consideration of feedback on its new and somewhat controversial proposed rule to require two man locomotive crews for most railroad operations. Some local services, like the Metra commuter train pictured operating here in the Chicago suburbs near Skokie, Illinois, would be excepted. Image copyright 2/2016 by Nikki Burgess; all rights reserved.

Today is the Summer Solstice; the longest day of the year.  Lots of daylight for safe and effective work on those out of doors projects around home, office, or plant—do it safely!  The world of Dangerous Goods and EH&S was typically busy over the last week:

One thing lots of folks do during the long summer days is have their trees trimmed.  OSHA is having a stakeholders meeting to consider additional regulations overseeing the workers who perform this unheralded but often quite dangerous work.  See the link for meeting details

USDOT recently released a rule regarding portable oxygen concentrators aboard aircraft; the rule basically standardized the specifications for such devices, rather than continuing the old practice of treating each unit as wholly custom.  The agency has released a correction to said rule, available here

In bulk hazmat transport news, PHMSA is looking at establishing a new ICR for users of Portable Bulk Tanks and Intermediate Bulk Containers (IBC’s) used in hazardous materials transport.  The ICR will involve the use and review of shipping papers.  PHMSA is also looking at a new ICR for meter proving on Cargo Tank Vehicles.  See the details here

The FRA has extended the comments period for its proposed new minimum train crew staffing rule.  The proposed rule has created a firestorm of angst in the railroad industry and as usual, has pitted management against labor.  With limited excpetions, the rule would require trains to operate with at least two qualified crew members in the control cab of the lead locomotive or train car.  Cost and safety issues dominate the discussion.  Want to have your say?  Here the way to do it

In PTC news, Canadian Pacific Railway became the second major North American rail carrier after CSX to submit its new Positive Train Control regimen to the FRA, achieving the milestone well ahead of the new deadlines.  The PTC system, when implemented, is intended to increase railroad operational safety by providing an added “remote” protection again things like speeding, missing stop signals, etc.  The mandate was driven by oil train derailments and passenger train crashes in both the US and Canada over the last several years, often involving loss of life.  Here’s your story

The FMCSA is amending its Hazardous Materials Safety Permits rules to update the current incorporation by reference of the Commercial Vehicle Safety Alliance’s (CVSA) ‘‘North American Standard Out-of-Service Criteria and Level VI Inspection Procedures and Out-of-Service Criteria for Commercial Highway Vehicles Transporting Transuranics and Highway Route Controlled Quantities of Radioactive Materials as defined in 49 CFR part 173.403.’’ Currently the rules reference the April 1, 2015, edition of the out-of-service criteria and, through this final rule, FMCSA incorporates the April 1, 2016, edition.  Here is the story

Are you a barge operator, pushing or towing hazmat laden barges?  The Coast Guard is establishing safety regulations governing the inspection, standards, and safety management systems of towing vessels. The Coast Guard and Maritime Transportation Act of 2004 reclassified towing vessels as vessels subject to inspection and authorized the Secretary of the Department of Homeland Security to establish requirements for a safety management system appropriate for the characteristics, methods of operation, and nature of service of towing vessels.  See the new regs here

The Council on the Safe Transportation of Hazardous Articles (COSTHA) is appealing the new requirements regarding packaging and transport of Nitric Acid contained in the recently released HM-218H Hazardous Materials Amendment.  COSTHA seeks the addition of a transition period to allow depletion of stock for current shippers.  Early forecast is that PHMSA may be amenable to adding such an allowance.  More here

Sometimes, we just like to share good news!  The American Chemistry Council (ACC) extended important recognition to two of its members recently.  The awards recognized the companies’ accomplishments in both process safety and employee training and safe work practices.  Ashland Chemical and the heavy industry manufacturer FMC were both selected for these honors.  See more about this program here