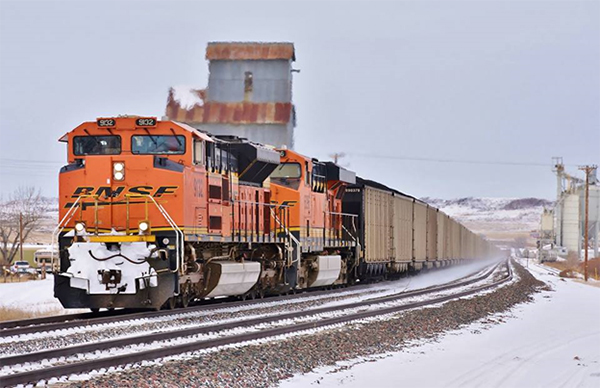 BNSF Railway will conduct a test of automated track inspection technologies under FRA aegis. BNSF 9132 rolls a coal train east through Moorcroft, Wyoming in bitter winter conditions in February of 2016 on part of the track segment that will host the testing protocol. Photo ©2/2016 by Nikki Burgess; all rights reserved.

As the nation heads into Election Day on November 6th, regulatory activity continues at a fairly brisk pace.  After such a quiet summer, it’s good to see things stay a little busier!  Here’s all the latest:

The agency published a correction to its recently released update to the air rules under HM-259.  The correction inserts a revised entry for UN 1782, Hexaflourophosphoric Acid in the HMT in the 49 CFR 172.101.  See this correction here

The carrier published its own copy of the expected variations for air carriage of dangerous goods for 2019.  You can also find this information in the 60th edition of the IATA DGR.  Here a link to the FedEx announcement

The agency published an ICR related to the process of acquiring Commercial Driver’s Licenses (CDL).  The move is intended to ensure stakeholders are following all the required steps to safely acquire such specialized licenses.  See the ICR here

The nation’s fifth armed service published a meeting announcement as part of its public preparation for the upcoming IMO convention to be held in the UK in late November.  The USCG prep meeting will be held in Washington DC on November 13th—that’s looking like a very busy day in our nation’s capital!  Here’s the meeting details, including how you can participate

The agency published a newly proposed ICR that will,  if implemented, impact air carriers and repair stations affiliated with the aircraft industry.  The ICR relates to reporting the status of the affected stakeholders’ dangerous goods training programs and results.  Comments close on January 19th.  Here’s the link

As part of the push towards increasing automation in transport functions, the FRA has approved a pilot program to be conducted by Class 1 carrier BNSF railway that will see automated inspection technologies take the place of current human visual inspections of rail corridors for track and or right of way defects that could impact transport safety.  Depending on how the testing goes, such technologies could see increasing use nationwide.  The initial testing will take place on a coal traffic corridor in Wyoming and Nebraska.  See the test plan here