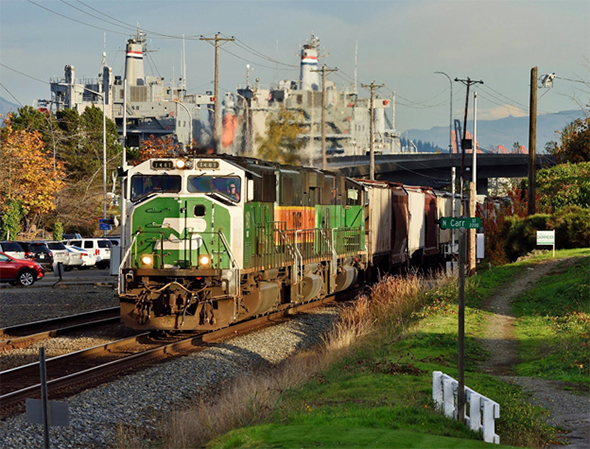 The Department of Homeland Security announced a regulatory review with public input that will address potential changes to how the agency handles dangerous goods and other safety issues, with a focus on both rail transport and port security as two of the main objectives. A BNSF freight train passes the Port of Tacoma, Washington on October 22nd, 2016. Image © 10/2016 by Nikki Burgess; all rights reserved.

Happy Monday, all!  Are your Halloween preps nearly finished?  Only a week to go!  Speaking of weeks; last week’s DG Digest gave pride of place to our brand new edition of the Dangerous Goods Report, so, this week, we’ll take a look at what the last two weeks of activity have brought to the forefront of regulations.  Let’s jump right in:

Alaska Airlines was forced to do extensive testing of passenger baggage after an undeclared shipment of fish preserved in the chemical formaldehyde leaked in flight recently.  Although no safety of flight issue occurred and no one was injured, the chemical is a known carcinogen and the resulting mess caused extensive delay and inconvenience.  More proof that carriers will have to pay extra attention to what passengers may unwittingly introduce aboard their aircraft.  See the details here

The agency has reopened the comment period in reference to the hazard communication portions of the “significant new use” provisions of the revised Toxic Substances Control Act (TSCA).  Still have a comment to make on this important revision?  Here’s the portal