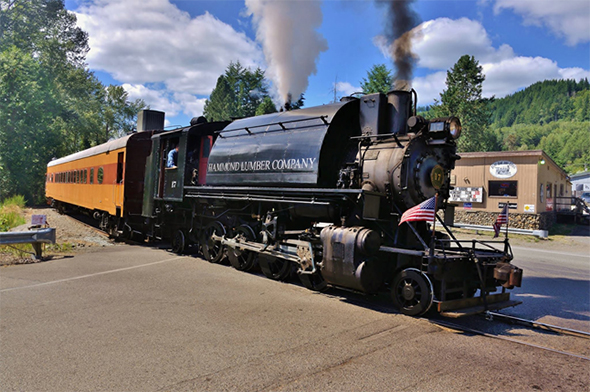 The FRA released a revised schedule of fees assessed in the case of any penalties found during FRA audits and inspections. This may impact all railroads, even small tourist carriers that operate vintage steam like the Mt. Rainier Scenic Railroad, seen here passing through a grade crossing in Elbe, Washington on the 4th of July weekend. Image © 7/2016 by Nikki Burgess; all rights reserved.

Last week’s DG Digest was pre-empted by an otherwise very busy schedule here at Labelmaster; so, this week, we’ll be covering the last two weeks instead of just one.  Gosh it’s been busy!  Whatever happened to the “lazy crazy hazy days of summer?”  Gone with the song, apparently.

Herewith, the action on the DG/EH&S front over the last two (count em’!) weeks:

The Federal Motor Carrier Safety Administration amended the civil penalties listed in its regulations to ensure that the civil penalties assessed or enforced by the Agency reflect the statutorily mandated ranges as adjusted for inflation. FMCSA is required to promulgate a catch-up adjustment through an interim final rule. This interim rule is effective on August 1, 2016. See the new rates here

In IMO news, the new SOLAS agreement regarding container weighing requirements went into effect as of July 1st.  Accurate gross weights for shipping containers must now be appended to the shipping documents.  See the provided link for an industry consortium’s guide to how to comply

The US Coast Guard is also getting in to the “Penalty Adjustmetn” act.  This rule amends Department of Homeland Security (DHS or Department) regulations to adjust DHS and component civil monetary penalties for inflation. The adjusted penalties will be effective for civil penalties assessed after August 1, 2016 whose associated violations occurred after November 2, 2015. This rule is effective on August 1, 2016

Now that President Obama has signed the new version of the TSCA, the USEPA has released an Implementation Plan on how they intend to be guided by the legislation.  New chemicals receiving more stringent review tops the list of changes.  See the full plan here

If you already guessed that OSHA would also get in on the “Penalty Fee Adjustment” craze this cycle—you’d be right.  OSHA is indeed doing so, and here are the new fees

In big news from Canada:  Health Canada (think OSHA, but in Canada) has released the first phase of its Technical Guidance on the Requirements of the Hazardous Products Act (HPA) and the Hazardous Products Regulations (HPR) – WHMIS 2015 Supplier Requirements. In plain English, that means the new WHMIS Health Act revised to incorporate the UNGHS.  You can get a copy of this vital-for-shippers-to-Canada publication via the following link