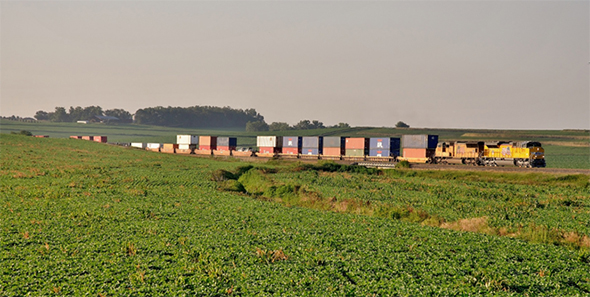 A federal court in California issued a temporary injunction on Friday the 29th of October suspending the collection of a controversial $45 per rail car “State of California Hazardous Material Fee” for such laden cars traveling to, from, or through that state. Class One Railroads Union Pacific and BNSF Railway are joint parties to the action seeking to permanently overturn that fee based on federal jurisdictional issues. Here a Union Pacific intermodal train bound for California climbs west out of the Missouri River Valley near Blair, Nebraska, in June of 2012. © 6/2012 by Nikki Burgess; all rights reserved.

Happy Halloween everyone!  Make it a safe and memorable family holiday.  Let’s get to this week’s issue of “treats” in the world of Dangerous Goods.

Hazmat shippers by rail to, from, or through the State of California are breathing a sigh of at least temporary relief after a Federal Court issued an injunction barring the collection of a $45/car fee for rail cars laden with any amount of hazardous materials in California.  A lawsuit jointly filed last summer by Class One railroads Union Pacific and BNSF seeks to overturn the fee based on federal primacy over interstate commerce.  The temporary injunction issued last Friday appears to indicate that federal courts are taking a view in favor of that contention.  See more here

PHMSA spent last week dealing with, among other things, a raft of special permit actions.  Apparently the end of this year is going to find them busy receiving new applications.  See the action in these links:

The FAA has issued this notice to advise the public of a meeting of the Twenty Sixth RTCA SC–225 Rechargeable Lithium Batteries and Battery Systems Plenary. The meeting will be held November 29 to December 01, 2016, 9:00 a.m.–5:00 p.m.  Here’s your details

The agency issued a notice stating that the sundry iterations of the revised Driver’s Medical Exam Form and Card/Certificate featuring dates of revision ranging over several months last year are all acceptable for use until current stocks are exhausted.  There had been some concern in the motor truck industry that only forms bearing the most recent revision date would be acceptable.  See the notice here

The agency announced the receipt of Norfolk Southern Railroad’s PTC Implementation plan.  The major eastern carrier becomes the latest Class One to submit the required plan to the FRA in reference to meeting the mandated December 2018 PTC implementation deadline nationwide for lines carrying hazardous materials and/or passenger traffic.  See the plan link here