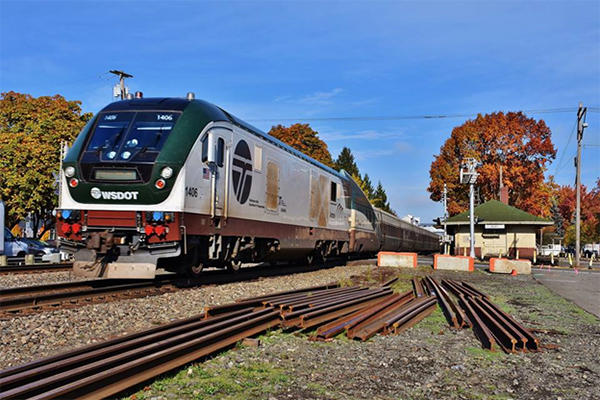 The FRA published an ICR intended to help determine the impact of pre-duty commute times on locomotive engineer performance. An Amtrak Cascades Service train speeds through the fall colors and past the depot in Kent, Washington on October 27th, 2018. Image © 10/2018 by Nikki Burgess; all rights reserved.

The last week of October finds the nation grappling with the midterm election cycle and, again, the shadow of public violence.  Certainly we here at Labelmaster offer our deepest condolences to those affected by what has happened in Pittsburgh and elsewhere.

The last two weeks featured a busy surge in regulatory activity as many of our public agencies as well as several international bodies published a wide variety of actions affecting many aspects of our industry.  See below for all the latest—and despite it all, have a Happy Halloween!

The agency issued emergency waivers of the HMR for areas in Florida and Georgia affected by Hurricane Michael.  These waivers allow transport of dangerous goods within the affected zones to be undertaken with certain exceptions to the normal routine otherwise enforced by the HMR.  They are intended to allow for rapid response by first responders in the disaster zones.  Such transport must be approved by local EPA and or Coast Guard personnel in the areas affected.  See the two waivers here:

The agency released a long awaited harmonization rule applying to air transport of hazardous materials.  Among other things, the action:

The major UN harmonization contained in HM-215O still awaits issuance, however.  The timeline for that remains fluid at present, though industry “rumor control” seems to be pointing at a post 1/1/2019 publication.  Meanwhile, here’s your link to this more intermediate action

The agency published a lengthy list of renewing information collection requests.  ICR’s are typically used to monitor progress in safety efforts and to see the effect of regulations on stakeholder operations.  Subjects as disparate as air emissions, ionizing radiation, and even the operations of fire brigades are covered in this new and wide ranging list.  See it here

Another ICR issuance deals with occupational exposures to chemicals in laboratories.  Laboratories present unique challenges account the often wide and transient variety of chemicals and compounds that may pass through them, and the potential presence of minimally trained students in such locations.  See the request here

The agency is also accepting nominations for membership on the National Advisory Committee on Occupational Safety and Health (NACOSH).  This stakeholder driven committee advises OSHA on how to craft effective safety rules while still allowing for productive and efficient work processes for employers.  See the new membership opportunities here

The agency is publishing a new ICR that will attempt to gauge how the driving schedules of CMV drivers affect accident rates.  The effort is part of a broader goal to address how sleep disorders and disruptive employee schedules may affect transportation safety.  See the ICR here

In line with what the FMCSA is doing, the Federal Railroad Administration is also issuing an ICR related to work schedules and the impact of pre-trip commute times on locomotive engineer performance and safety.  See this ICR right here

The agency’s reauthorization bill was signed into law on October 5th.  This will have impacts in the DG area which include renewed commitments to regulatory harmonization with ICAO standards as well as the establishment of lithium battery safety committees and working groups.  See the new law here

The association has released new guidance regarding the carriage of powered mobility aids aboard passenger aircraft.  The guidance seeks to clarify some of the rapidly evolving issues surrounding devices powered by lithium batteries.  Many people depend on these devices for daily life, and the association is seeking to balance passenger need and convenience with the practical need to protect the safety of flight.  See the new guidance here

The Center for Disease Control is adding a definition of “Emergency Response Employee to its regulatory structure.  This may affect notification requirements for employers that deal with certain toxins and have responsibilities to the CDC for such mandates. See the new definition here

The last named ICR is of particular interest; a standardized program permit, if adopted, could significantly streamline the administrative burden many facilities current face in getting started, or changing current operations.

The agency released an ICR dealing the provision of foreign flag air carriers and their security plans related to US operations.  These plans can affect several areas of regulation under the 49 CFR and air safety regs.  See the ICR here

The Transportation Department has published a new rule requiring reporting by airlines of mishandled scooters, wheelchairs, and similar devices.  Why an interest to our community?  Many such devices are now classified as or at least carry as part of their fit dangerous goods, most often lithium batteries.  If the equipment is mishandled, that could indicate a dangerous goods issue as well.  See the rule here

The (Proposal of Amendments to Annexes A and B, as amended) have been officially accepted and will enter into force on 1 Jan 2019 as declared by  C.N.304.2018 (TREATIES-XI-B-14) and CN.488.2018 (TREATIES-XI.B.14). This action will affect portions of upcoming ADR regulatory changes.  See the announcement

The Canadian Standards Association (CSA) released the draft update to safety standard CSA B625, “Portable tanks for the transport of dangerous goods” for a 60-day consultation period, ending Dec. 11, 2018. Here’s the notice