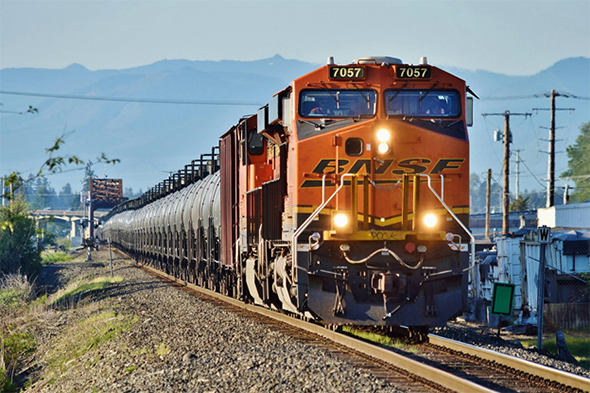 BNSF unit oil train seen at Everett, Washington on May 27th, 2017. BNSF has asked the FAA for an exemption for the use of drone aircraft to assist its maintenance forces. Image © 5/2017 by Nikki Burgess; all rights reserved.

This morning’s blog finds our nation reeling from yet another senseless and horrific act of gun violence.  As we mourn the most recent wave of victims, let us all hope that someday, peace and reason and hope will replace fear and ignorance and anger as the way that all of us choose to relate to one another.  On behalf of the entire Labelmaster family, I extend our condolences and hopes for recovery to all of those suffering because of what has happened in Las Vegas.

The Postal Service has announced a free webinar to outline its most recent efforts to align with other bodies in its treatment of shipping lithium batteries.  In general terms, the Post Office only handles what the other bodies describe as “excepted” batteries.  The webinar is on October  5th.  Here’s your link to the free session

The agency issued a pair of renewed ICR’s seeking information about the state of operator training, emergency procedures in place, and support equipment needed for the nation’s powered industrial truck and building maintenance platform (i.e. devices like forklifts, scissor-lifts, pallet trucks, powered scaffolds, and other such units) operators.  Such units are a significant s cause of workplace accidents, and poor and incomplete training and or the lack of appropriate maintenance and emergency procedures are often identified as a contributing factor to the cause of such accidents.  See the ICR’s here:

The Board announced a meeting of the Rail Energy Transportation Advisory Committee (RETAC) on Thursday, October 19, 2017, at 9:00 a.m. E.D.T. The meeting will be held in the Board’s headquarters in Washington, DC. The RETAC was formed in 2007 to provide advice and guidance to the board and serve as a forum for emerging issues related to the transportation of energy resources by rail.  See the meeting details here

BNSF Railway became the first of the nation’s Class One Railroad carriers to ask the FAA for an exemption for the use of drone aircraft to assist its maintenance forces with track and right-of-way inspections required under the 49 CFR.  How much of the activity will pass from direct human to remote device inspection with review by humans remains a work in progress; for now, the idea is to use drones for hard-to-reach places like bridge structures and other areas difficult for humans to directly observe.  It’s likely to be an ongoing development process.  See the exemption request here