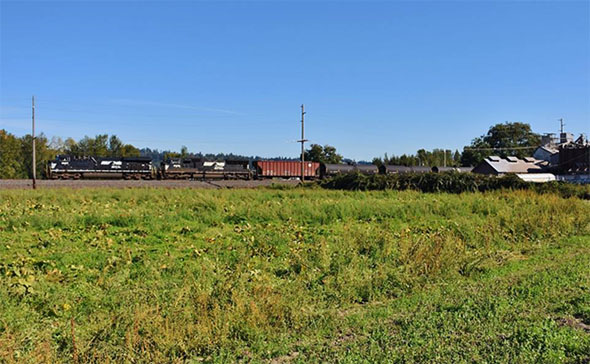 PHMSA published a rescission of its rule that would have required the use of so-called “ECP” braking systems on some high hazard freight trains. A loaded crude oil train with Norfolk Southern locomotive power operates over the BNSF Railway in Kent, Washington in September, 2018. Photo © 9/2018 by Nikki Burgess; all rights reserved.

September finished off with a fairly busy week.  UPS and FedEx both chimed in with new tables for their Dangerous Goods services, and the FMCSA finally released a new medical form for CMV drivers—something that had been percolating all summer.  A variety of other interesting news rounded out the period.  Here’s all the latest:

Due to the impact of Hurricane Florence, the Fiscal Year 2018 Consolidated Rail Infrastructure and Safety Improvements program that will improve intercity passenger and freight rail transportation systems in terms of safety, efficiency, or reliability is having its application deadline extended to give applicants additional time to complete the application process and submit applications. FRA will accept applications until October 12, 2018 at 5 p.m. EDT. See the notice here

The agency is rescinding the pending regulation that would have required the use of Electronically Controlled Pneumatic Brakes, or ECP’s, on certain high-hazard freight trains.  The agency cites the cost of the requirement versus its expected benefits in removing the requirement.  ECP’s would have acted to simultaneously apply all of the car brakes in a freight consist equipped with them, rather than sequentially, one after the other from the locomotive back to the end of the train, as do current brake systems.  ECP’s would have decreased needed stopping distance for trains equipped with them.  The ECP requirement was mandated as part of the agency’s response to the 2013 Lac Megantic oil train derailment disaster in Canada.  See the rescission here

The wait is over for new CMV driver medical forms!  The agency has released the new version of the form, which makes obsolete previous versions. The old version having an OMB date of 8/31/2018 in the upper right hand corner is no longer valid.  The new forms have an OMB date of 9/30/2019 and should be used moving forward.  Here’s a link to the new forms as offered by Labelmaster

Along with its release of the new medical form information, the agency published a new rule which offers a variety of corrections and other minor emendations to the Motor Carrier regulations.  Most of the regulating agencies release rules like this form time to time, correcting a variety of small issues that creep into the regulatory language over time.  Here’s a link to this amending rule

In good news for veterans and employers who need CMV drivers, the agency published the final rule that will establish reciprocity between state and military commercial type driver’s licenses.  The rule will allow for a much easier transition for military veterans with CMV type driving experience into civilian jobs that require such licensing.  Individual states will still have the authority to set basic requirements for their local jurisdictions.  See the rule here

The carrier released an updated set of DGL tables and operator variations for air for 2019—now just around the corner! Here’s your link

UPS, like FedEx, also released new tables, these one for the period beginning 10/1/2018.  Here’s your links to access this data

The world’s leading aviation authority released updated news about the status of its effort to revise DG training to reflect a competency based approach.  The latest news indicates the effort is still on track, but inception now looks to be delayed to the 2021-2022 period vice the original 2019-2020 timeframe.  This will give stakeholders more time to ready their programs to comply with the new provisions.  Those provisions can be found in draft form in Appendix H of the current edition of the IATA DGR.  See the link to the updated information announcement here