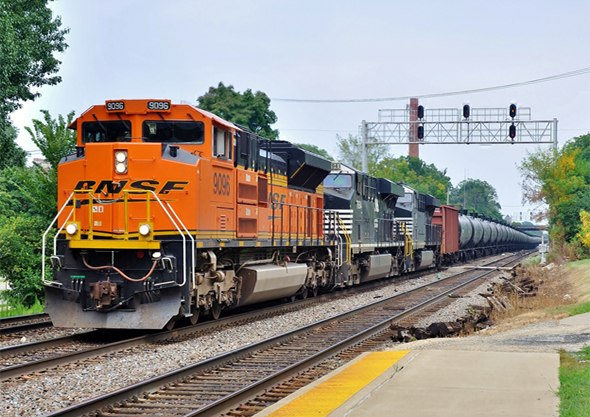 The DOT has released a new ICR gauging ongoing compliance with the new tank car safety standards. A BNSF “oil train” rolls through Hinsdale, Illinois in August of 2014. Image © 8/2014 by Nikki Burgess; all rights reserved.

The end of July finds the Federal Register having roared back to life after a period of relative quiet; most of the action revolves around information requests versus rulemaking, but still, given how slow things have been in the US regulatory world, the activity is significant.  See all the action below.

The nation’s DG safety people are requesting comments related to the upcoming UN meetings in Geneva, Switzerland late in November.  The biannual UN meeting sets policy for global DG handling and as such, here’s a chance to get your views heard via the U.S.’s official delegation.  Interested?  Deadline for comments is November 17th!  Your path to communicate is right here

The agency has released a new ICR regarding “tank car facilities.”  The request is meant to determine the rate at which new cars are being built and or older cars refitted to meet the revised standards of construction (i.e. to meet DOT-117 vice DOT -111 specifications).  This part of the ongoing attention paid to the subject as post-mortem for the 2013 derailment disaster in Lac Megantic, Quebec.  See the ICR here

The agency announced the 31st Plenary Meeting of the Rechargeable Lithium battery Committee.  This refers to batteries aboard aircraft as fitted equipment versus those carried as cargo, but is of interest nevertheless, especially to carriers with their own fleets.  The meeting will be on August 31st, 2017.  See the details here

The agency has released an ICR related to medical screening procedures for commercial drivers living with Diabetes.   The disease can produce a variety of ill effects which could negatively impact a driver, so the FMCSA has screening procedures in place for it and this ICR addresses those requirements.  See the request here

In a busy week, the US Department of Labor and its OSHA sub-agency issued a raft of Information Collection Requests, or ICR’s.  They span a variety of subjects and are summarized below:

Although it’s not often thought of in the DG community, the US Post Office is actually quite a large carrier of such materials, albeit in what we’d think of as being very small packages.  The agency has just revised its rules covering the shipment of lithium batteries to harmonize with the ICAO TI and 49 CFR.  A very general way of thinking about the new setup might be to say that the USPS rules largely reflect those for batteries which under DOT rules would be covered under the 49 CFR 173.185’s exceptions.  If your battery needs a DOT Class 9 label, the post office won’t take it.  See all the details right here