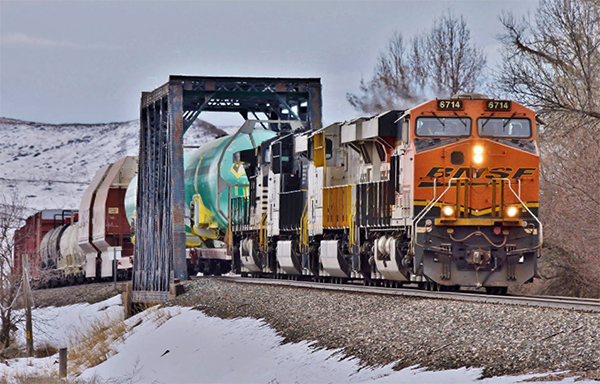 This week’s digest activity runs the gamut from air to rail issues. Here BNSF freight H-KCKPAS-9 has a little of both as it rumbles westbound across the Little Big Horn River in Montana with Boeing passenger aircraft fuselages in early February. Image © Nikki Burgess 2/2016; all rights reserved.

The run-up to Valentine’s Day was not without interest in the world of Dangerous Goods and EH&S. Among the many highlights in a rather eventful week:

The FRA issued a new rule regarding improved window glazing strength in all new locomotives and passenger carrying cars. The action comes as increased focus on railroad safety continues as a priority after the highly publicized accidents in New York, California and Quebec over the last few years.  Here is further info: https://www.gpo.gov/fdsys/pkg/FR-2016-02-09/pdf/2016-02524.pdf

In news from our friends across the Atlantic that relates to safety and the movies (it is Oscar time, after all!), Britain’s Health & Safety Executive (their agency which approximates the function of OSHA in the United States) issued criminal complaints against several persons regarding the workplace accident which broke actor Harrison Ford’s leg during the filming of the most recent installment of the Star Wars movie franchise. Ford was struck by part of a hydraulic door on the set depicting his character Han Solo’s spaceship, the Millenium Falcon.  The British HSE alleges criminal negligence associated with the accident on the part of Foodles Production (UK) Ltd, which is a Disney owned business unit operating in the EU.  More on the story? https://www.yahoo.com/movies/star-wars-producers-charged-over-harrison-ford-accident-143448502.html

Senator Bill Nelson (D-FL) introduced legislation which if approved would authorize the FAA to impose a ban on the transport of Lithium Ion Batteries as bulk cargo aboard aircraft. This would reverse action in Congress in 2012 which stripped FAA of that power.  This is all part of the current jousting between government, industry, and the transport sector about the safety of Lithium Batteries aboard aircraft.  FAA released a safety advisory on the 11th that addressed this issue as well:

In one very large and complex piece of news, OSHA has released a truly massive new set of guidance documents—400 plus pages—regarding how to correctly implement and function within the classification guidelines in the revised Hazard Communication Standard—the now somewhat infamous 2012 revision which incorporated the harmonization with the Globally Harmonized System, or GHS. Labelmaster is evaluating this new document and will blog more specifically about its provisions once we’ve had a chance to absorb it, but in the meantime, if you have a need to look at the full thing yourself, here is a (printable) link: https://www.osha.gov/Publications/OSHA3844.pdf

On a new proposal which would significantly harmonize further aspects of their Dangerous Goods Regulations (called the TDGR) with the “usual suspects” international regulations (UNMR; ICAO; IMDG Code) as well as the US 49 CFR. The Canadian proposal includes interesting language on a concept called “dynamic referencing” under which new versions of revised regulatory texts could be incorporated by reference into the TDGR without a specific act of regulation to do so being necessary.  This hold the promise of being both a timesaver, and a potential confusion causer—one can imagine scenarios under which a consignor, consignee, and inspector all think that a shipment is either compliant or not based on which version of a particular incorporated reference is being used.  Nevertheless it is an interesting idea and if used in an organized way might be quite helpful.  Want to comment?  Here’s the link:   TDGRegulatoryProposal-TMDPropositionReglementaire@tc.gc.ca

The FAA was not idle either. A new SAFO (safety alert for operators) was issued dealing with—you probably guessed it—further issues revolving around Lithium Batteries.  The new guidance impacts carriers, but will obviously also trickle down to those consigning the shipments.  Need more information?  Here’s the link: http://www.faa.gov/other_visit/aviation_industry/airline_operators/airline_safety/safo/all_safos/media/2016/SAFO16001.pdf