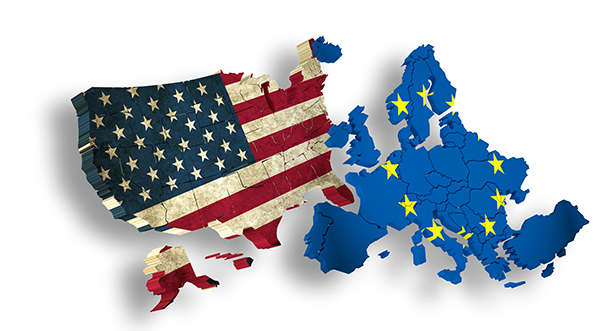 Remember, back when you were in school, the feeling of walking out of a final exam knowing you absolutely nailed it?

That’s how we want Dangerous Goods pros to feel about their operations every day—like they got every last detail right, and that all their outcomes will be positive.

Unfortunately, that’s not the reality. Year after year, our Dangerous Goods Confidence Outlook reveals that hazmat pros’ confidence ranges all over the map. What’s more, North American hazmat pros are generally less confident than their peers in Europe.

To probe more deeply into this transatlantic confidence divide, we interviewed our own pair of transatlantic experts: new Consulting Partner Geoff Leach, of the UK, and Manager of Regulatory Affairs and Corporate Responsibility Brian Beetz, of the U.S. Here’s an edited transcript of what Leach and Beetz had to say about confidence and compliance.

Asked why, in general, European hazmat pros are more confident in their operations’ compliance than North Americans, both Beetz and Leach cited training.

Beetz:   Based on conversations my team has had with customers, I certainly think part of it is a lack of sufficient training for them to be confident. People have expressed a little bit of frustration in getting support from their companies to ramp up and improve their training.

Leach:   In a number of other countries, such as the UK and The Netherlands, there are well-defined, well-matured training approval schemes where companies and instructors have to go through pretty rigorous measures to get a training approval. In the States, of course, that’s not the case.

For example, in the UK, instructors have to be approved, which requires them to sit an examination and be observed delivering the course material—which is also subject to approval (and to reapproval every two years). Also, the CAA sets the exams that must be used, so no matter what school you go to, you’re going to get the same regulatory exam.

Beetz:   In the U.S., there isn’t a specific formal exam that’s universal across the board. The 49 CFR outlines the specific areas required—general awareness, function-specific, security and whatnot. But they really leave it up to the employers to self-certify, and that’s where I think it’s lacking. I think some companies are a little lax with that because they don’t have to meet a specific exam that’s enforced across the board.

The 2018 survey asked about this statement: “The regulatory and compliance requirements for DG items should be tighter—more restrictive.” The percentage of hazmat pros who agreed was:

European pros also said enforcements should be more severe. Why?

Leach:   I’ve been to countries where the maximum fine is in the hundreds of dollars. Well, that’s not a deterrent to anybody. So, I can well understand people in Europe wanting more enforcement, because let’s say company A is spending all this money and company B is just thumbing their nose.

Beetz:   I think it would be interesting to see whether they were thinking about the economic impact that can occur when regulations become more strict. There’s that fine line of wanting things to be as safe as possible but not putting an overburden on the shippers from a financial standpoint.

Leach:   Now, of course, if you’re not safe, you’re not going to make money. You can’t say “safety at any price” because it does come at a price, and if people can’t afford to comply, then they won’t. So you’ve got to be careful when increasing regulation; otherwise, the opposite to what is intended can result.

Beetz:   I’m sure a lot of those people are also thinking about the companies that aren’t complying—they’re getting away with the cost of compliance being a lot less for them. If enforcement is increased, there could be a crackdown on the people who were sliding by and not in compliance.

As more organizations in the Dangerous Goods supply chain realize the competitive advantages of superior compliance, confidence becomes something of a self-fulfilling prophecy. If you’re confident that your compliance is strong enough to create a competitive edge, you’re more likely to seek the resources you need to make that advantage a reality.

Here, Beetz and Leach elaborate on these advantages:

Beetz:   A company that’s proactive, that really takes compliance to heart, can look at it from an overall standpoint that over time it’s going to improve efficiencies in their shipping and save them money. They’re less worried about frustrated shipments or fines. It really takes an entire corporate acknowledgement of wanting to be in compliance across the board and seeing the overall complete benefits over a long-term period.

Leach:   Well, let’s turn it around the other way. If you’re not compliant, at the very least your goods aren’t going to go anywhere. They’re going to be stuck at the dock—and your competitor, who has complied and is getting their goods to where they need to be going, is enhancing their reputation and increasing their bottom line. That’s at the minimum—worst case, enforcement action or even accidents can occur, which can result in companies going out of business altogether.

Compliance—and, by definition, safety—need to be considered as an important part of maintaining a competitive advantage.

Next week—get Geoff and Brian’s transatlantic views on the upcoming HM215O harmonization. Or is that harmonisation?