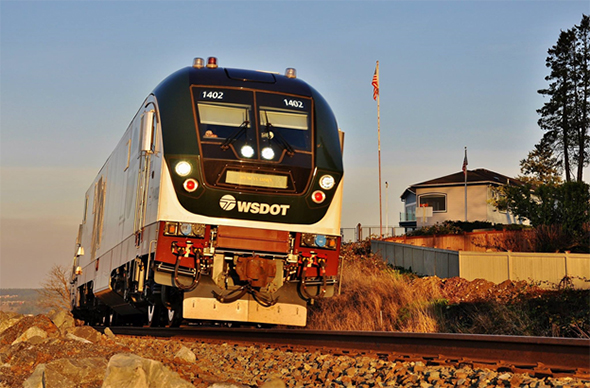 The FRA published its annual ICR requiring the report of rail accident rates. The agency uses the information to help craft responsive safety rules in the coming year. The latest in rail safety, a brand new Siemens SC-44 Charger locomotive owned by the Washington State DOT and operated by Amtrak, flies through Steilacoom with its train along the Puget Sound on a rare sunny winter afternoon, Sunday, December 10th, 2017. The new Chargers are taking over the Pacific Northwest’s corridor passenger service. Photo ©12/2017 by Nikki Burgess; all rights reserved.

As busy holiday preparations overtake most of the country—have you finished YOUR shopping?—the regulatory scene remains relatively quiet in terms of “heavy hitters,” although quite a few items of interest certainly did pop up this week.  Perhaps the recently concluded UN meetings in Geneva will lead to increased action in the new year—if so, we’ll be sure to bring it to you as it happens!  Meanwhile, here’s the latest:

The agency published three sets of Special permit applications.  Most of the applications deal with modifications to a variety of DOT Spec cylinders; also included are requests regarding use of the AFMAN DoD cargo manual outside the United States, and minor actions referencing cargo tanks.  See the applications here:

The world’s aviation transport association announced its intention to explore new limits on shipping lithium batteries and explosives under some circumstances of carriage.  How those announcements will or maybe translated into actual operational rules remains to be seen.  See the news here

The Canada/US Regulatory Cooperation Council is soliciting request for suggestions to improve regulatory cooperation between the two countries.  The RCC was formed in 2011 to help foster easier and more effective trade between the tow neighbors, particularly in regards to the reciprocal use of harmonized and simplified regulations.  Find more info here

Chemical Safety and Hazard Investigation Board

The nation’s body dedicated to researching and improving chemical safety published a rule regarding how its findings would be made available to the public under the Freedom of Information Act.  Among other specifications, the rule requires publication in “publicly available web sites” and “presentation in clear and plain language.”  See the Board’s FOIA rule here

The agency renewed the charter of its Medical Advisory Board.  The board supports the agency by establishing and when necessary modifying the rules applying to the physical qualifications required for the operators of commercial motor vehicles (CMV) across state lines.  See the renewal here

In a very rare appearance in our blog, the Federal Bureau of Investigation is issuing a new ICR under the Bioterrorism Act that will address the question of who has—and who should have—access to certain highly hazardous toxins and materials. Many such agents are of course by their nature also regulated hazardous materials.  Does your company deal in this arena?  If so, you may want to see what the FBI has planned.  Here’s your link

Labelmaster is a full service provider of products and services for the Hazardous Materials and Dangerous Goods professional, shippers, transport operators, and EH&S providers. See our full line of solutions at www.labelmaster.com