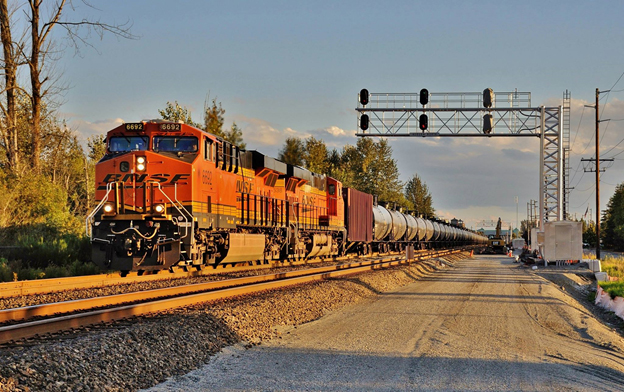 US regulatory agencies PHMSA and OSHA have released brand new guidance helping to explain the correct labeling options available for users of bulk containers. Such guidance includes steps for operators of rail cars, like the oil carrying tank cars seen in this BNSF unit train northbound at Auburn, Washington on September 18th, 2016. Image © 9/2016 by Nikki Burgess; all rights reserved.

With Mid-September already here, the fall football season is not the only kick-off freshly in the news; regulatory matters also continue in play, with the associated agencies busy with their respective agendas.  Let’s take a look at what’s new:

EPA announced a new focus on the hazardous waste implications that may be involved in returned retail products at consumer level.  This ties in to PHMSA’s recent push to ensure the safe transport of such consumer commodities at retailers.  Previous to these efforts, once hazmat got to the retail level, to a certain degree it “fell off the radar” and so these new initiatives from multiple agencies show that the regulatory structure is intent on getting a better grasp on the issue.  See EPA’s take on things here

If you ship non-bulk to or from Canada, you’ll want to review the proposed new guidance that Transport Canada has published regarding small containers.  See the link below to access the proposal and to follow the pathway for questions and comments

The airline industry association IATA has released the summary of planned 2017 Changes to its Dangerous Goods Regulations (IATA DGR).  The update will bring the manual into congruence with the most current rules found in the ICAO regulations—the rules published by the UN sanctioned body that helps ensure safety of flight worldwide.  See the summary here

Unless you’ve been living under a rock for the last ten days, you can hardly have missed the current flap surrounding the recall of the Samsung Galaxy Note 7 mobile device account alleged fire and explosion concerns related to its battery.   On September 15th the US Consumer Product Safety Commission (CPSC) issued a formal recall notice, which will affect more than one million such devices.  The FAA and Transport Canada have also banned the devices from use or recharging during flight, as well as from any checked baggage.