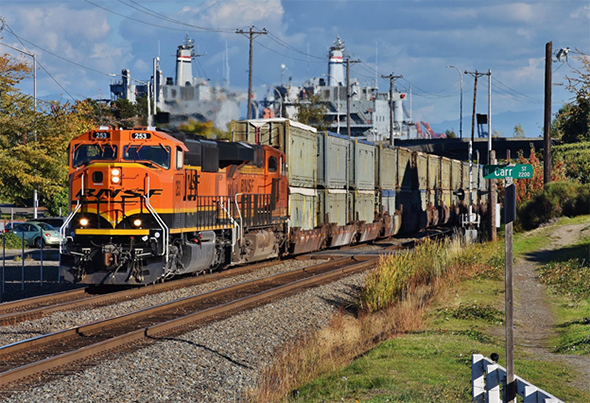 The FRA released a revised site for its Office of Rail Safety in an effort to make interacting with the agency and using its database both easier and more effective. A freshly rebuilt BNSF SD75M leads a southbound train along Tacoma, Washington’s waterfront on Sunday, October 8th, 2017. Image © 10/2017 by Nikki Burgess; all rights reserved.

The first week of October has wrapped up and in contrast to the last week of September, things returned to the more typical quiet that has characterized regulatory activity in general since the advent of the new administration last January.  Gives us all more time to rake leaves!  Here’s the latest:

The board announced a public meeting for October 6th in Washington, DC.  This board helps investigate and determine responses to chemical and other hazardous materials incidents, whether rin transport or other phases of use and handling.  See the meeting details right here

The agency published “Emergency Waiver No. 5” in reference to the suspension of certain aspects of the HMR in the Commonwealth of Puerto Rico account the damaging impact of Hurricane Maria.  The waiver will allow certain exemptions form normal transport regulations affecting hazardous materials on the island as long as appropriate safety and environmental rules are followed.  See the waiver for specific guidance

The agency published its “Top Ten List” of reasons companies were cited for safety violations in 2016.  Leading the way was fall protection, which is always high on the list, but hazard communication came in a rueful second place this year, indicating the increasing focus OSHA is placing on enforcing the new GHS based safety and communication rules.  If the changeover is something your company is still lagging on, it’s past time to step up your HCS game, because OSHA is definitely looking.  Things like electrical safety and powered industrial trucks (forklifts etc) rounded out the rest of the list.  See it here

Our northern neighbor’s analog to PHMSA published a request for comments concerning a revamp of the TDGR rules governing the treatment of non-bulk drum type packaging for dangerous goods.  The agency also announced it intends to submit more-or-less the entirety of the TDGR for consideration concerning revision of its content over the course of the next two years.  Depending on how much change Transport Canada decides to incorporate, that may mean quite a bit to keep in mind when shipping to, from, or within Canada over time.  Keep an eye on our blog to stay abreast of whatever develops.  We’re on it!  Here’s your link to the new drum issue

The nations’ rail safety agency announced it has published a revised set of guidelines and reporting instructions concerning accident and incident response as well as safety statistics to its Office of Rail Safety.  The new guidance is intended to make it easier to interact with the agency’s’ reporting system and to use the safety data presented there in a more effective manner.  See the revised site here