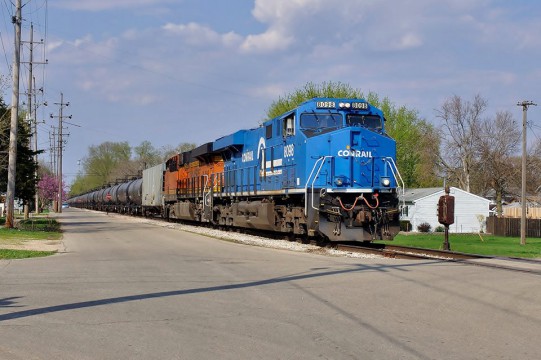 Under new FRA E.O. No.30/Notice No.1, unit trains carrying flammable liquids like this one passing through Chillicothe, Illinois behind Norfolk Southern’s Conrail Heritage Locomotive operating over the Iowa Interstate Railroad in April of 2015 will face significant new operating restrictions. Photo ©4/2015 by Paul Burgess; used with permission.

At approximately 1:15 AM EST on July 6th, 2013, a unit freight train of the cross-border operating Montreal, Maine, & Atlantic Railroad (MM&A) loaded with crude oil from the Bakken Shale Formations in North Dakota in the western United States suffered an as-yet unexplained failure of its automatic and manual braking systems while left unattended and presumably safely secured on the MM&A mainline track near the town of Nantes in provincial Quebec, Canada.  The uncrewed train then proceeded to “run away” in an uncontrolled and accelerating descent of the 1.2% downhill grade on which it had been left tied down, and at an estimated speed of over 60 mph entered a 10 MPH speed restricted curve in the city center of the town of Lac-Mégantic some seven miles from the train’s starting point for the runaway.  Tragically, much of the train derailed and multiple cars loaded with crude oil ruptured, caught fire, and exploded in the heart of the community.  The resultant massive fires and sustained release of hazardous chemicals combined to kill or leave missing almost fifty Canadian citizens of the town, injure countless others, and destroy or contaminate much of the city center and nearby lake in a disaster for which recovery efforts continue.

Since that date several other spectacular derailments followed by large fires have occurred, thankfully in mostly unpopulated rural areas which have precluded any human casualties but that have caused considerable issues with both delayed rail operations and environmental mitigation.  As a result of these incidents, the widespread and uniformly negative media coverage surrounding them, and the ensuing and often thinly informed political pressure on the Federal Railroad Administration (FRA) to “do something,” an entire series of both regulatory rules and emergency orders (EO’s) have been issued since Lac Megantic .  Items such as tank car construction standards, railroad signaling systems, track and equipment maintenance intervals and associated federal reporting requirements, train securing procedures, and a plethora of other relevant issues have been newly created, revised, or tightened up.  The railroads themselves have invested countless dollars to upgrade their infrastructure and rolling stock to comply.

While much of this activity has been sensible, helpful, and well directed, in some cases the FRA has acted to directly control actual train operating procedures; something that is extremely unusual for this agency.  On Monday, April 27th, 2015, the FRA issued an EO (FRA Emergency Order Number 30, Notice No. 1) that limits the speed of “trains transporting large amounts of highly flammable liquids” in what they term “High Threat Urban Areas” or HTUA’s (These are basically any large urban area and a ten miles radius around it, as delineated in US 49 CFR 1380.3 Appendix A).  For the train to qualify, it must have either twenty cars of Class 3 liquid in a continuous block, or thirty five cars total in the train’s consist.  Under this scenario, all unit trains carrying petroleum and/or ethanol products and many general freight trains carrying varied tanks will be affected.  The order limits speed to a maximum of 40 miles per hour.

This presents the railroads with a significant operating restriction, because it will limit what is known as “average car velocity” on their systems at virtually all major hubs—this is a measure of how fast the average freight car travels over the systems.  The lower the average velocity, the more capacity that is being used to transport the same amount of freight.  In order to overcome this, railroads will have to increase capacity, either via track expansion or by acquiring additional locomotives, cars, and operating personnel to run them.   As private businesses, railroads have access to only limited capitol each year.  This may represent a significant additional expense and dealing with it may force a rise, perhaps a sharp one, in freight fees—costs that will travel downstream to the retail level at some point.  Another potential issue is that when both relatively slower and faster trains are forced to use the same tracks (which is what is going to happen—the railroads lack any reasonably available alternate resource to shift traffic to avoid the so-called HTUA’s, since virtually every major city in the country is defined as one) a condition can occur in which crew availability (train operating crews are limited in their hours of service by federal regulation) simply cannot match the required operating numbers, trains back up, and a situation called system gridlock occurs in which yards and sidings become overwhelmed with trains which have no other place to go.  This has happened in isolated areas of the rail network previously due to, among reasons, bad winter weather, line blockages, and even poorly planned merger issues (the Union Pacific “melted down” in a famous 1996 incident following their merger with Southern Pacific).  However, this EO presents at least the potential to introduce an operating restriction all at once and network wide which could drastically alter the present traffic flows and at least potentially lead to severe congestion—everywhere at once.  Such a scenario has never really played out before.

At present there is little evidence that the speed restriction will actually solve any relevant safety issue—how safe the tank cars are traveling at 40 mph vice at 65 mph (which is the otherwise typical maximum authorized freight train speed on most Class One railroad main lines) is something that is open to question in regards to it making any measurable difference in an accident.  Another issue is that despite the derailments—admittedly spectacular in nature as they have been—rail transport remains far and away the least hazardous mode of transport for dangerous goods, with more than 99% of loads arriving at their consignees without issue.  FRA has rarely strayed directly in to operational matters to this degree.  The impact of this new directive remains to be seen.

Here is a link to the Emergency Order:

Labelmaster is a full service provider of products, software, and services to the Dangerous Goods transport and EH&S communities.  See our full line of solutions at www.labelmaster.com.