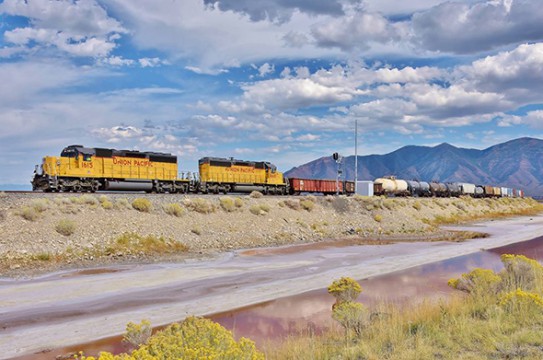 If made law, under House Bill HR 3651 trains carrying passengers and or certain hazardous materials will be able to operate as is as the current PTC deadline is extended from December 31st 2015 to December 31st 2018. Here a Union Pacific freight train operates near the Great Salt Lake in Utah. (image © 9/2015 Nikki Burgess; all rights reserved)

The US House of Representatives has introduced legislation to delay until 2018 the current deadline for US railroads to implement Positive Train Control (PTC) systems on their tracks.  As discussed in a previous blog on the subject,  the nation’s railroads have jointly stated the physical impossibility of completing such an inter-operative system by the end of 2015 as is currently specified and have indicated that without an extension to the law’s deadline they would be forced to shut down much of their systems.  Such a move would quickly bring chaos to the national infrastructure.

House Bill HR 3651 will ease the mandated control restrictions on passenger rail and the carriage of toxic by inhalation chemicals in freight trains, delaying until December 31st, 2018 the ban that would have occurred on the same date in 2015.  The bill does require that beginning in 2017 the railroads make routine reports to the US Department of Transportation (USDOPT) on progress towards meeting the new deadline.  At present, most major railroads indicate that they project that they can finish installation within about the next eighteen months to two years.  HR 3651 appears to enjoy broad bi-partisan support and Transportation Committee members in the Senate indicate that they will plan similar legislation to the House bill as soon as passage in that body occurs.  As long as HR 3651 is not caught up in a last minute partisan wrangle, the nation’s railroads should get the breather they need to finish their work on a national PTC system.