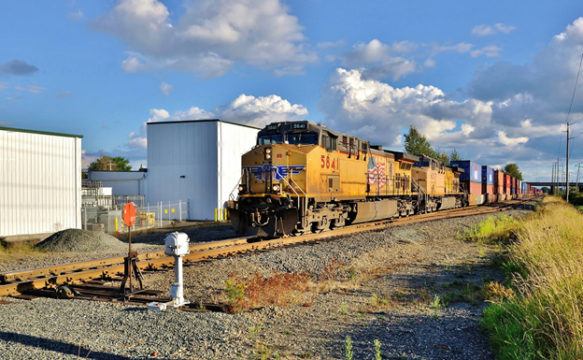 The Union Pacific Railroad, one of the two (with BNSF Railway) major western rail carriers in the United States, had its Positive Train Control implementation plan delivery to the Federal Railroad Administration announced last week. Here a UP trains heads north at Main Street in Auburn, Washington in late August. Image © 8/2016 by Nikki Burgess; all rights reserved.

I hope everyone enjoyed their Labor Day holiday safely—and that the summer it capped was a good one for you.  The surprisingly busy regulatory week leading up to the break featured significant new announcements, so let’s get right to it!

The industrial alcohol (methanol) industry will want to take a look at this new rule from the above agency which revises the way many industrial alcohols will be treated for tax purposes.  Such effects may travel quite a way down the logistics chain, since so many hazardous materials use denatured alcohols as a part of their ingredients list.  See the tax news here

The Consumer Product Safety Commission (CPSC) is considering a request that they amend the agency’s 1987 Statement of Interpretation and Enforcement Policy regarding labeling of household products containing methylene chloride ( a common ingredient in many paint and varnish stripping agents). The request is to expand the Policy Statement to address acute hazards from inhalation of methylene chloride vapors in addition to the chronic hazards addressed by the current Policy Statement. The Commission invites written comments concerning the petition, no later than Halloween Day, October 31st.  Here’s the notice

In news not directly related to shipping Dangerous Goods but which will be of interest to many shippers nevertheless, South Korean container line Hanjin Shipping sought bankruptcy protection in US Federal Court last week, with an attendant stoppage on the berthing and servicing of its vessels at ports worldwide.  Hanjin is the third largest shipping line in the world dealing with containerized traffic.  How the proceedings will play out is open to question at press time; one rumored solution is a buyout by Hyundai Shipping Lines, South Korea’s other major such carrier.  Meanwhile the stoppage casts a pall over import plans just as the US ramp up in inventory for the holiday retail season begins.  See more here